The Gray Marmot - Not Just a Groundhog 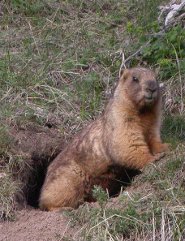 Due to their large populations, the marmot family is not on the endangered species list and is, in fact, listed as one of the animal families showing least concern for extinction. Most of the subgenus of the marmot species are highly interactive and social animals, communication with specific noises much like prairie dogs. Marmots normally dwell in ground burrows in interactive communities and communicate through loud whistles to each other when intruders happen into their area. Marmots, including the gray marmot, gorge themselves on grass, berries, moss, flowers and plant roots prior the hibernating for the winter.

Marmots, especially those in the Mongolian region like the gray marmot, have been a staple of the population's diet. They have been hunted, usually when they are fatted for hibernation, and consume as part of the local fare as "tarvaga". They are also utilized in the creation of "boodog" This is a dish prepared on special occasions by cooking mutton meat with hot stones inside the deboned cavity of a marmot.

Though one of the main predators for marmots is humans, marmots are dangerous and infrequently pose a threat to humans in the form of pneumonic plague. Gray marmots are carriers of this less common form of the plague, which is very virulent. Outbreaks in past years have killed a number of people in Tibet and Mongolia.

Marmots of all types vary in size and coloring; the gray marmot is generally 20 inches in body length with an additional 8 to 9 inches of tail. The width and weight of a marmot will depend on the time of year and how close they are to having their litters, mid-June, and hibernating, late September.

The Gray marmot is listed as Least Concern (LR/lc), lowest risk. Does not qualify for a more at risk category. Widespread and abundant taxa are included in this category, on the IUCN Red List of Threatened Species