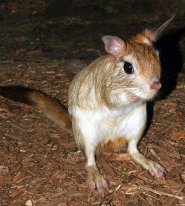 A Springhare (Pedetes capensis) looks like a kangaroo, because of the long tail, long hind legs and shorter front legs. As its name implies, it is an enthusiastic jumper, and can jump up to 2 meters in a single jump. Technically though, Springhares are rodents, not hares. The head is short and rounded, they have big eyes, with ears that are both upright and narrow.

A Springhare grazes and its diet mainly consists of grass. Every so often, one would eat some roots and leaves, they could also consume wheat and oats. Their natural predators are owls, snakes and jackals. The typical Springhare could give birth all throughout the year, and the female would have 3.6 liters annually on the average. Young are born with hair all over their bodies and it would take at least 3 days before the eyes would open.

Springhares are principally nocturnal but they could be up and about in the daytime too. At day times, they stay in tunnels which they themselves make. Experts have studied that two individuals could reside in many burrows at different times. Actually, they usually form 3 burrows close together forming a circle. A burrow is ordinarily set near the biggest tree.

These rodents are hunted in South Africa, being thought of as a significant food source. In the wild, they could be said to be solitary, but if captured, they could co-exist peacefully.

The Spring hare, springhaas, springhare is listed as Least Concern. Does not qualify for a more at risk category. Widespread and abundant taxa are included in this category, on the IUCN Red List of Threatened Species

Namings for the spring hare

Some facts about the
Springhare