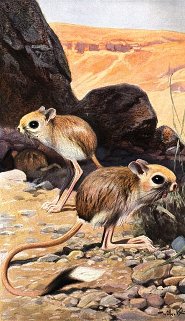 The Lesser Egyptian Jerboa (Jaculus jaculus) is mouse-like in appearance with large eyes and ears with brown and gray fur with a lighter color belly. The animal is very small at only 95 to 110 millimeters long (3.74 to 4.33 inches) and 43 to 73 grams (1.51 to 2.57 ounces) in weight. Despite the Lesser Egyptian Jerboa's small stature, the creature can jump an impressive one meter (3.28 feet) from a standing position and 1.5 meters (4.95 feet) at top speed. It has even been known to travel up to ten kilometers (6.21 miles) in one evening in search of food. This is due to the animal's long bald tail except for a clump of fur at the end for balance and huge feet. Its posture and stride mimics that of a kangaroo. However, unlike a kangaroo, the Lesser Egyptian Jerboa is native to areas in central Asia, Iran, Israel, Sudan and north Africa. It is an especially common animal in Egypt, hence its name.

Since the Lesser Egyptian Jerboa lives in dry desert areas, it lives in burrows in the sand. The animal sleeps during the day and feeds on seeds, grass, grains and even some insects at night. Although the creature's main defense is its swift jumping abilities, it must remain vigilant against faster fox, weasel, and snake predators. Safety may not even be found in its own burrow as these can also become home to scorpions and spiders.

Being a solitary creature, little is known about how it communicates with other Lesser Egyptian Jerboas. In captivity, these animals seem to recognize each other by smell by closing their eyes and touching noses together. They breed twice a year and have liters of three pups at a time. Although the mother will have close contact with her babies in the wild and stay with them in the burrow for eight weeks, breeding in captivity is never successful. For whatever reason, the mother simply refuses to touch her pups after their birth. Yet, Lesser Egyptian Jerboas brought into captivity can live up to six years and tamed as pets. Wild Jerboas can live up to four years.

The Lesser egyptian jerboa is listed as Least Concern. Does not qualify for a more at risk category. Widespread and abundant taxa are included in this category, on the IUCN Red List of Threatened Species

Some facts about the
Lesser Egyptian jerboa