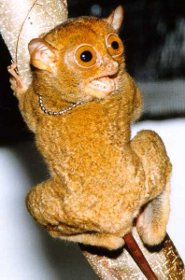 The Western Tarsier (Tarsius bancanus), is a tiny mammal found on the islands of Borneo and Sumatra amongst the jungles and rainforests in densely vegetated regions. The tarsier pelage colorings range from sandy beige to dark brown. This mammal is approximately 80 to 160mm (3.15 to 6.3in) long and weighs in at approximately 85 to 160g (3 to 5.8oz). Although this animal is small in size it has extremely large eyes, which are approximately 15mm in diameter. Their eyes are one of the key traits that enable the Western tarsier to be successful during nocturnal hunting. In addition to the large eyes, the Western tarsier also has extremely sensitive ears, similar to a bat, and a heightened sense of smell when hunting. They are equipped with a long tail and elongated hands that aid the tarsiers when hunting prey and moving about in the forest canopy. Tarsiers are mainly insectivorous animals, but also eat lizards, crustaceans, scorpions, snakes and bats. The tarsiers are typically the prey of owls.

Tarsiers are only protected by law in Malaysia and Indonesia. They are hunted by people for pets, but soon die as they require live food and are very susceptible to tapeworms. In addition, the destruction of their forest habitat is also reducing the population of the Western tarsiers. The Western tarsier is not currently on the endangered species list, unlike the Philippine tarsier (Tarsius syrichta).

Tarsiers display a variety of interesting behaviors. One unique behavior is the tiny animal’s ability to leap over 2 meters in distance and 1.5 meters in height. Tarsiers have this ability due to their extremely long hind leg structure as well as using the long tail for balance during the leap.
The tarsiers prefer to groom themselves, except during mating season. This is done using the third and fourth toe claws to scratch their bodies followed by fur licking. The animals clean their faces by rubbing it against tree branches.
They are monogamous and live in family units. This unit consists of the mated pair and offspring. After sexual maturity offspring remain in close proximately to their parents and are sexually mature at one year old. They give birth to one offspring with a gestation period of six months. The offspring are born precocial, with their eyes open and bodies covered with fur. After approximately 45 days, young are weaned as they can capture their own prey.

Picture odf the western tarsier by Tabdulla, licensed under GFDL

The Horsfield's tarsier, western tarsier is listed as Least Concern (LR/lc), lowest risk. Does not qualify for a more at risk category. Widespread and abundant taxa are included in this category, on the IUCN Red List of Threatened Species

Some facts about the
Western tarsier