Pygmy tarsier, not extinct after all 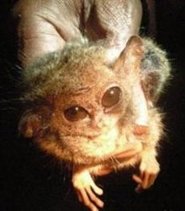 The pygmy tarsier (tarsius pumilus) ia a mammal that becomes active in the twilight and night. The pygmy tarsier lives in central Sulawesi Island in Indonesia. The island is mountainous and has less plants than a tropical lowland. The pygmy tarsier was believed to no longer exist since the nineteen twenties. In the year two thousand, one was accidentally killed. In 2008, a research team from Texas caught several pygmy tarsiers to collar them so they could be tracked.

The pygmy tarsier is 95 - 105 millimeters long and weighs less than 75 grams. It is the smallest of the tarsiers with tinier ears and big eyes about 16 millimeters in diameter. It's tail is furry unlike other tarsiers and is 135 to 275 millimeters long. The pygmy tarsier has claws on the five fingers on each of its hands and on the two toes of each of its feet. The claws help in gripping and climbing the upright tree limbs. It is tan with mostly grey or brownish red coloration.

The pygmy tarsier has a single mate at a time and stays together for up to 15 months. There are two mating periods with one at the start of the monsoon and the other at the end of the monsoon. The time between the mating period is six months. The gestation is about 178 days ordinarily. The young are born in May and from November to December.

The baby pygmy tarsiers grow up quickly. The babies begin to catch their own food around six weeks. They travel in family groups after three weeks. The immature females stay with the family until adulthood. The young males leave the family group earlier.

The pygmy tarsiers wake up at twilight and stay in the tree top canopy. It spends most of the day time sleeping on upright branches. The pygmy tarsier don't build nests and don't mark territory with scent glands. They communicate by touch and mutual action between the family group. This true of other kinds of tarsiers.

Pygmy tarsiers eat insects and are completely meat eaters. They have an essential part in the arrangement of their natural home through the insects and local food chain.

Mankind can be a danger to the pygmy tarsier by overrunning the land where it lives.

Image from http://en.wikipedia.org/wiki/File:Pygmy_Tarsier_2008.jpg. This image is a faithful digitisation of a unique historic image, and the copyright for it is most likely held by the person who created the image or the agency employing the person. It is believed that the use of this image may qualify as fair use under United States copyright law. Other use of this image, on Wikipedia or elsewhere, may be copyright infringement. See Wikipedia:Fair use for more information.

The Lesser spectral tarsier, mountain tarsier, pygmy tarsier is listed as Data Deficient (DD), inadequate information to make a direct, or indirect, assessment of its risk of extinction, on the IUCN Red List of Threatened Species