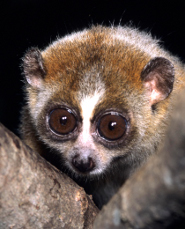 The Pygmy slow loris (Nycticebus pygmaeus) is a rare, large-eyed nocturnal primate. Although, they primarily live in the tropical forests of Vietnam, Laos, Cambodia and China, they can also been found in Vietnam's bamboo thickets and Laos's evergreen forests. The Pygmy slow loris almost became extinct in Vietnam after much of its habitat was destroyed by war. Today, deforestation is still a major threat to this species, and it is currently listed as vulnerable on the International Union for Conservation of Nature's Red List.

The Pygmy slow loris is a very small primate, growing to only approximately 15 to 25 centimeters (roughly 6 to 10 inches) in length. It typically weighs on average 400 grams or 14 ounces. The loris has a stubby tail, light brown to deep reddish brown fur, white markings on its face, as well as a gray or white underside. This primate also has large, forward facing eyes that help it to see at night.

Lorises are nocturnal omnivores. They enjoy dining on a wide selection of food, including floral nectar, tree gum or sap, plants, fruits, small mammals and insects. These creatures have strong hands and feet that allow them to grip branches very tightly. When a loris spots prey, it will grip a branch tightly with its hind legs and then lunge forward to grab it. It will also use the element of surprise, allowing unsuspecting prey to approach it before launching an attack. The Pygmy slow loris can rarely be found on the ground, preferring the comfort and safety of the trees. Predators of the Pygmy slow loris include pythons, orangutans and hawk eagles.

The Pygmy slow loris is a mostly solitary creature. They typically only come together during their mating season, although they have occasionally been found sleeping together in small groups. When asleep, the loris will curl up in a tight ball, while still clinging to a branch.

Though lorises are cute, resembling tiny teddy bears, they are one of the few mammals capable of producing a toxin. When frightened, these small primates have been known to lick the area under their arms where the toxin is produced, so that if it bites something, the poison will get into the wound. Though the toxin is not known to be fatal to humans, it may cause painful swelling. In addition, one woman who was bitten was reported to have gone into anaphylactic shock.

The Lesser slow loris, pygmy loris, pygmy slow loris is listed as Vulnerable (VU), considered to be facing a high risk of extinction in the wild, on the IUCN Red List of Threatened Species

Some facts about the
Pygmy loris