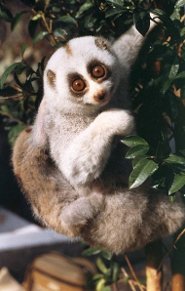 The Slow Loris (Nycticebus coucang), is a critically endangered species in the Loris family. It is one of the Strepsirhini primates, and is found in parts of Southeast Asia. Its fur coat is thick and soft. The eyes are large, round and inquisitive. This friendly looking animal has a soft, welcoming appearance, but it actually dangerous due to its poisonous bite.

This species is quite small, weighing in at between 21 and 24 oz. (599 - 685 g). Its length is also small, measuring between 10 to 15 inches (27 - 38 cm). They are covered completely in fur, including their tail, which is short enough to be hidden in the coat. This extremely thick fur is a light brown color, with a darker stripe that extends from the top of the head to the tip of the short tail. Its face is highly expressive. A nocturnal animal, the eyes of the Slow Loris are large and round, lending it a look of inquisitiveness. The eyes and face are further highlighted by dark brown rings that surround each eye and a thick, white stripe that runs between the eyes.

This genus of Loris can be found in tropical rainforests. They are attracted to the thick foliage, sometimes found in bamboo groves, that will also be home to much of their preferred diet. Indonesia, the Malay Peninsula and Thailand are all home to this particular species. However, their numbers are diminished and they can be difficult to find. Being superb climbers, they make their homes in tall trees. During the day they curl into tight balls, tucking their heads between their thighs. When disturbed or startled, they will make a buzzing or hissing noise. The name of this species becomes clear when observing movements, as it moves very slowly. The steps are deliberate, and the Loris will typically maintain three points of contact with the tree branch as it moves. However, the Slow Loris is not limited to these types of movements. When the Loris is catching prey or escaping predators, it can move very quickly.

Tiny, extremely sharp teeth allow the Slow Loris to enjoy its diet of lizards, bird eggs, insects, tree sap, and nectar. In addition to these smaller meals, the Loris will also capture and dine on small birds and other small mammals. This species has glands on its inner elbow that secrete a poisonous toxin. This toxin is used as both a weapon and a form of protection. The toxin can be sucked into the Slow Loris' mouth, giving it the poisonous bite. It can also be smeared over the bodies of its offspring, protecting them from predators.

Predators of the Slow Loris include pythons and hawk eagles. Fortunately the Slow Loris can effectively protect itself from most predators by using its own toxin as a shield. By curling into a tight ball, the Loris can actually excrete the toxin onto its back, effectively protecting itself from most predators. It also has the ability to simply release its hold on the tree branch and fall to safety. However, the Slow Loris has not been able to find a protection from its greatest threat: mankind. Expanding urban areas are destroying their habitats, and their appearance makes them highly attractive additions to the exotic pet market. Their soft fur and inquisitive appearance make them highly desirable pets for some people, even though they are wild animals and are never recommended as such. Exotic pet traffickers will remove or cut their sharp teeth, protecting potential owners from their bite. Once this is done, the Slow Loris can never be returned to the wild.

Picture of the slow loris with babies on her back by Helena Snyder, licensed under GFDL

The Slow loris is listed as Least Concern (LR/lc), lowest risk. Does not qualify for a more at risk category. Widespread and abundant taxa are included in this category, on the IUCN Red List of Threatened Species

Some facts about the
Slow loris