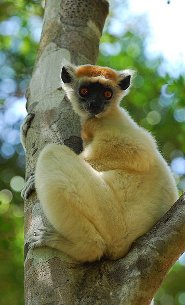 The Golden-crowned Sifaka (Propithecus tattersalli) is native to Madagascar, an island off the southeastern coast of Africa. Madagascar, is an island of unique biodiversity.The northern part of this island is home to the Golden-crowned Sifaka, a member of the primate family known as a lemur. It is about the size of a house cat and weighs in at around 3 kilograms. With a honey colored body, light under-belly, long tail, dark face with bright eyes, they are a sight to behold. The crown of the head is deeper in color than the body; it is golden.

The Golden-crowned Sifaka has a social structure that includes gathering together, foraging for food, and they are monogamous - they mate for life, and produce a single offspring at a time. Their diet is primarily foliage from the trees of the conifer forests. They also eat some flowers, seeds, and in the dry season, they are known to eat bark.

They travel the trees by swinging from limb to limb for food, using their long tails as a third hand to grasp with and have forelegs that are more like arms and hands than paws, and hind legs that are longer than the forelegs allowing for leaping when on the ground. They leap bipedally; on their hind legs. They are graceful, well balanced, gentle, and communicate vocally with a variety of calls.

Northern Madagascar is being harvested. It is having its forests destroyed for agricultural lands, harvesting of hardwoods, its land pillaged for gold, and its wildlife hunted (poached) for food. Slaughtered in large numbers, the lemur population is dropping quickly, placing them on the endangered list. As of 2008, only ten forest patches that could support viable populations remained, according to the IUCN.

The Golden-crowned sifaka, tattersall's sifaka is listed as Critically Endangered (CR), facing an extremely high risk of extinction in the wild, on the IUCN Red List of Threatened Species

Some facts about the
Golden-crowned sifaka