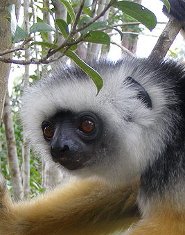 The Diademed Sifaka (Propithecus diadema) is a species of lemur belonging to the Propithecus genus, known as sifakas. As are all lemurs, they are endemic to the island of Madagascar. Their range lies mostly within the lowland forests of eastern Madagascar and extends into the subhumid forests of the Central Highlands. The lowlands are made up of dense evergreen forests with canopies of up to 30 m (98 ft). The highlands are a more mountainous region covered in broadleaf forests. Males are 37.2-50.8 cm (14.6-20 in) in height and 3.04-6.5 kg (6.7-14.3 lb) in weight. Females are 37.2-53.5 cm (14.6-20 in) in height and 3.1-6.7 kg (6.83-14.8 lb) in weight. Sifakas are arboreal, rarely venturing out of trees. Their only terrestrial predators are the fossa and the Nile crocodile. They may also be hunted by humans. It is considered taboo by many in Madagascar to hunt the sifaka, although much of the younger generation does not agree.

The Diademed Sifaka has a long, silky coat which is reddish-brown at the extremities and white to gray on the back and chest. The neck is black, as are the face and hands. The face is encircled by a white crown. Primatologist Russell Mittermeier called it "one of the most colorful and attractive of all the lemurs." Their diet consists of leaves, seeds, fruit and flowers. Traveling from tree to tree throughout the day, they consume as many as 25 species of vegetation. The Diademed Sifaka is a social animal, living in groups of 3-10. They scent-mark their territory, which they aggressively defend from other members of their species. They are known to tolerate the presence of other lemurs.

The Diademed Sifaka is an endangered species. It is classified by the International Union for Conservation of Nature as critically endangered. It is estimated to have a population of 6,000 to 10,000 individuals. The largest threat to this species is human destruction of its habitat; native peoples employ slash-and-burn farming techniques which destroy vast areas of forest. Much of this destruction takes place in national parks far from the populated areas of Madagascar's east coast, where laws protecting endangered species are difficult to enforce.

The Diademed sifaka is listed as Endangered (EN), considered to be facing a very high risk of extinction in the wild, on the IUCN Red List of Threatened Species

Some facts about the
Diademed sifaka