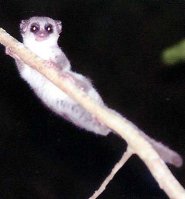 The Fat-tailed Dwarf Lemur (Cheirogaleus medius) lives in the Western and Southern Madagascar areas. The southwest trade winds influence a temperate climate in which the dwarf lemur lives. The areas islands support several lemur varieties including the large lemurs. The fat-tailed dwarf is small in stature and has a fat tail. They are around 6 inches or 15 cm long. The distinctive dark colored rings around their eyes give them the distinctive lemur look. They are a variety of grey and brown colors with a pelage pattern.

How Do They Live?

The lemur spends the majority of the daylight hours in the trees. They sleep in in groups to conserve heat and for protection. They burrow into natural holes in the trees. They are poor jumpers and depend on balance as they move along branches using all four feet. They can travel by tree or land, as long as they do not have to jump. They enjoy a lifespan of fifteen to twenty years in the wild.

What Do They Eat?

They enjoy nibbling on a diet of fruits while up in the trees. At night, the lemurs are their most active. While they sleep in groups, they are solitary hunters. They search out insects and small vertebrates to complete their diet. The weigh around 145 grams or 5 ounces during the rainy season when food is plentiful. They store fat in their tails to sustain them during times of torpor.

How Do They Hibernate?

The fat-tailed dwarf lemurs are the only tropical primate known to hibernate. They do not experience a true hibernation, but rather a state called a torpor. While in this torpor, they go into a trance like state. Their metabolism slows, and they appear to be asleep.

The lemur adapted this state of inactivity to withstand the frequent droughts the plaque the area. They sustain themselves with the fat stored in their tails. They stay in the torpor longer than other animals, sometimes as long as eight months of the year. Their weight can drop as low as 75 grams or 2.5 ounces over the course of a torpor.

How Do They Mate?

The lemurs are monogamous and breed about once every three years. They usually have twins but can have litters as large as four. The gestational period is a short 60 - 65 days. Both parents participate in raising the kids. Studies have shown that if the father is killed or otherwise separated from the family the babies usually die.

Why Are They Endangered?

The two main causes of their endangerment are hunting and habitat destruction. Conservation efforts are aimed at correcting these two causes. They have proven to reproduce well in captivity. In 2008, the IUNC listed them as low risk but of concern for extinction. Birds and snakes are the biggest groups of predators these little lemurs face. Hawks and Boas are known predators.

The Fat-tailed dwarf lemur is listed as Least Concern (LR/lc), lowest risk. Does not qualify for a more at risk category. Widespread and abundant taxa are included in this category, on the IUCN Red List of Threatened Species

Namings for the fattailed dwarf lemur

A fattailed dwarf lemur group is called a 'troop'.

Some facts about the
Fat-tailed dwarf lemur