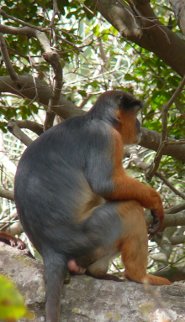 The Western Red Colobus Monkey (Procolobus badius) can be seen leaping from branch to branch high above the forest canopy. Members of the old world monkeys, the long strong tail helps them balance in the tall trees. They are incredibly beautiful animals. Their backs are covered with a dark grey, almost silver, fur and orange colored front with a white chest. The males and females are relatively similar in size weighing 8.2 kilograms, 18 pounds, and body length of 57 centimeters, almost 23 inches. The incredibly long tail nearly doubles their total length.

Their rainforest habitats have been restricted to small local areas found in the western parts of Africa such as Ghana, Liberia, Nigeria and other West African countries. The Red Colobus are very social and live in groups of male and female numbering 20 to 90 animals. Sometimes one may witness all male groups of 40 animals. This is because females leave the group in search of another while males stay with their birth group. The group chooses not to mark or defend a territory.

Western Red Colobus generally dine on young leaves, fungi and unripe fruit to provide their nutrition needs. They generally choose not to dine on ripe fruit since it causes gas and stomach upset. A diurnal animal, they spend the day feeding in the treetops where small young leaves are abundant. The population dropped to half during the last three generations from a number of causes. They are natural prey of chimpanzees for one. The main causes are, however, relate to habitat loss and hunting for bush meat. In fact, habitat loss has forced the Western Red Colobus to sometimes leave their treetop home in search of food. They may even be found in grassy areas.

What is so amazing about the Western Red Colobus is the capability to leap far distances among the tops of the trees. It is almost like flying. Their name Colobus, in fact, means cut short to indicate the thumb missing on the forehand. The missing thumb helps this animal leap onto branches without getting hands caught in the smaller branches and are true acrobats of the tropical rainforest.

The Red colobus, western red colobus is listed as Endangered (EN), considered to be facing a very high risk of extinction in the wild, on the IUCN Red List of Threatened Species