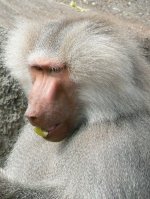 The Hamadryas Baboon (Papio hamadryas) is an old world monkey, living in Africa in Eritrea, Egypt, Ethiopia, Somalia and the Arabian Peninsula (Saudi Arabia and Yemen). Like all other baboons, there is a big difference in size between male and females. Males tend to be twice as big as females. They live in 'harems' of which one male, the Alpha-male, is the leader and up to 15 females can follow him. Such a harem is called an 'OMU', or 'One Male Unit', and is a highly complex social structure. Its main threat is habitat loss, because of transformation into fields and pasture land. It faces almost no threat from leopards and lions because of the low numbers of these animals in the range of the Hamadryas Baboon.

Interesting fact: In old Egypt, the Hamadryas Baboon was a sacred animal, since it was the attendant to the deity Toth, hence it is also called the 'Sacred Baboon'.

The Hamadryas baboon, sacred baboon is listed as Near Threatened (LR/nt), is close to qualifying for or is likely to qualify for a threatened category in the near future, on the IUCN Red List of Threatened Species

Namings for the hamadryas baboon

Some facts about the
Hamadryas baboon