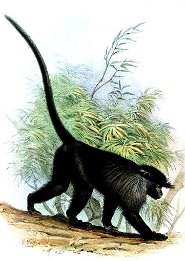 The gray-cheeked mangabey is not an endangered species, according to the International Union for the Conservation of Nature. But all three subspecies rely on the forests or swamps in order to survive. The forests of Central Africa are being cut down at a fast rate. Should the forests disappear, so will all three gray-cheeked mangabeys. The monkeys are also hunted by people for their meat. The monkeys are also hunted by leopards.

The gray-cheeked mangabey does indeed have grey or nearly white cheeks. The rest of the long, rangy body is black or dark gray. The chest and front legs of the monkey are more powerfully built than the rest of the body. The lean tail is the monkey's longest body part. The head is similar in structure to a baboon's. The eyes, face and skin are dark. Gray-cheeked mangabeys grow their longest hair on their shoulders and neck. This hair is often gray or tan.

Gray-cheeked mangabeys travel about in small groups or bands lead by an alpha male who has exclusive breeding rights to the females. Troops seperate in the tree branches to feed on insects, tree gum, seeds, nuts, flowers and fruit. Since its hard to see other troop members through the heavy foliage, the monkeys have a wide array of very loud calls to keep in touch. These calls include a "whoop-gobble" from the alpha male. He has a throat sac to help project his voice.

Gray-cheeked mangabeys only live to about 20 or 30 in the wild but have been known to live slightly longer in captivity.

Some facts about the
Gray-cheeked mangabey