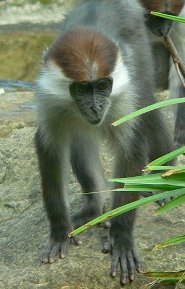 The Collared Mangabey otherwise known as the Red-capped Mangabey and sometimes as the Cherry-crowned Mangabey (Cercocebus torquatus) is a primate in the family Cercopithecidae. It is what is called a monotypic species, as there are no other species within the genus Cercocebus. Their natural habitat is located around Cameroon and spreads into Equatorial Guinea and also Nigeria. It may also be located in Benin; however it has not been confirmed as a naturally occurring resident. The Collared Mangabey can be defined as having a reddish brown hair atop its head, with white tufts of fur on its cheeks, followed by a uniform grey coloration on its body and back, with a lighter front. Additionally towards its hands and feet, along with the tail, there is a darker coloration, however with the tail it may end lighter than the uniform grey.

They usually live in what is deemed as the high forest but can also be found in mangroves, and swamp forests; and has also been shown adaptable to younger forests and even areas that have been cultivated. Their usual groupings consist of around 14-23 other Mangabeys and they feed mostly on fruit and seeds; however they may feed on small animals like invertebrates, and if they are lucky perhaps even an egg or two from a nesting bird. They are an arboreal species, which means they live in the trees and avoid the ground usually; however they will spend a good portion of their time on the ground in dry seasons. They are a daylight active creature, which is called diurnal. Just like humans usually do, they are active and awake during the day, and they sleep at night. In their social structure they are usually led by a single adult male, however when groups meet they may be friendly to each other and some members may even trade between them, rather than fighting.

The Binomial Name of the Collared Mangabey is Cercocebus torquatus, with the Genus being Cercocebus, which has 5 other species of mangabey, of which all but two are endangered, and one of those two is data deficient, meaning it could be endangered once more is known. Cercocebus belongs to the family Cercopithecidae and Superfamily Cercopithecoidea, or Old World Monkeys, which contains two subfamilies. Cercopithecoidea belongs to the Parvorder Catarrhini, which is one of the three main divisions, and is the one you and I belong to as well. From this point on the order is: -> Infraorder Simiiformes -> Suborder Haplorrhini -> Order -> Primates -> Superorder Euarchontoglires -> Infraclass Eutheria -> Class Mammalia.

The Collared Mangabey is currently listed as Vulnerable according to the IUCN, as pressures from hunting and habitat loss have drastically cut down on their numbers. Additionally a disconcerting trend has emerged where even in areas with low hunting pressure it has become uncommon or even missing completely. This means the population trend, meaning their overall population, is decreasing. They are considered a pest by many locals, and are hunted for their meat or to prevent perceived damage to crops. It is likely that they will be listed as endangered in the next decade; however they are not near the dire straits that the Tana River Mangabey is, as this species is critically endangered and is likely to be extinct soon, with only 1,000 or less left alive.

Interesting Facts about the Collared Mangabey: They are related to human beings by being in the same Order, Suborder, Infraorder, and Parvorder.

Picture of the by BS Thurner Hof, licensed under GFDL

Some facts about the
Red-capped mangabey