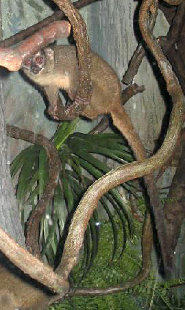 The Northern night monkey (Aotus trivirgatus), also known as the northern owl monkey, is an arboreal primate native to Venezuela and north-central Brazil. Its color is mostly black or brown with vivid white markings on the face. Body size is 24 to 47 centimeters (9.4 inches to 18.5 inches) with a tail length of about 22 to 42 centimeters (8.7 inches to 16.5 inches). Adults of both sexes weigh about one kilogram (2.2 pounds).

The northern night monkey lives in woodlands including tropical rainforest. It is omnivorous, eating a variety of small invertebrates, fruits, nuts, leaves and bird's eggs.

An unusual trait of the northern night monkey is that it can carry the same malaria parasite that effects humans, making it valuable for medical research. While its use for this purpose has allowed great strides in the treatment of the disease, it has also led to the capture of large numbers of night monkeys to be used as lab animals. Since the 1970's, there have been efforts to regulate this trade. While regulation is certainly in order, it cannot be denied that many human lives have been saved because of the medical work using this animal.

The taxonomy of the night monkey is still in dispute. Before 1983, all species of owl monkey were regarded as subspecies of A. trivirgatus. In 1983 genetic evidence revealed enough divergence between the subspecies to justify classifying them as separate species. This classification is still not universally accepted. As further research is conducted, the taxonomy will undoubtedly become more definite.

Some of the indigenous peoples also hunt the night monkey as a game animal.

Unfortunately, enforcement of hunting regulations has been spotty due to rugged terrain, the local culture and lack of funding. There is undoubtedly much illegal hunting and trafficking of the animal still going on. At the moment, humans are the most dangerous predators of the northern night monkey.

However, the greatest threat to this animal is another human activity, destruction of the rain forest, which is wiping out large segments of its habitat.

Picture of the northern night monkey by Stavenn, licensed under GFDL

Namings for the northern night monkey

Some facts about the
Northern night monkey