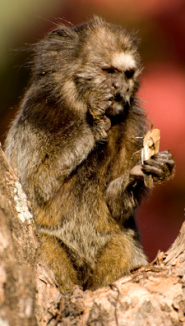 The Black-tufted Marmoset (Callithrix penicillata) is one of the New World monkeys in the order of the Primates. They mainly live in the forests of Brazilian Central Plateau, and more particularly, the rainforest. The Black-tufted Marmoset lives in the trees, and very seldom do they approach the ground level. As the name implies, they have black tufts around the ears, but usually, they would have some white hair at the facial area. The underside/rump are black, the tail mixed with white and black, but this tail is not for holding. (Black-tufted Marmosets use it for balancing.) They can reach a length of 22 centimeters and approximately 350 grams.

They are diurnal, and usually congregate in groups, anything from 2 to 14. These cliques are usually made up of a mating couple and the newborns. Males often help out in the raising of their young members. The Black-tufted Marmoset do migrate, they often relocate dependent on the season / weather.

Their foods consist of basically tree saps, but in difficult times (droughts), they would not let fruits or insects slide by. During the hardest times, bird eggs, mollusks and arthropods are all fair game. However, drought or not, their survival also hinges on whether they could escape from their predators, such as wild cats and snakes.

The Black-pencilled marmoset, black-tufted-ear marmoset is listed as Least Concern. Does not qualify for a more at risk category. Widespread and abundant taxa are included in this category, on the IUCN Red List of Threatened Species

Some facts about the
Black-pencilled marmoset