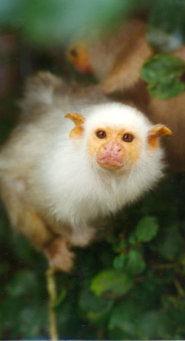 The Silvery Marmoset (Callithrix argentata) is a new world monkey, and is related to the other marmosets, however has some key behavioral and characteristic oddities that make it fundamentally different from other related species. The Silvery Marmoset grows to 28 centimeters (11 inches) in length in the largest individuals, and has a mass of 300-400 grams (10-14 ounces). They are mostly located in the Amazon basin, and have a white to silver-gray color and a dark tail, and have a contrasting feature of fleshy ears that are differing in color from its normal skin.

Their features also include a skull that has a jaw that tapers to a point, rather than a wider mouth, which is likely an adaptation to their feeding habits, which include eggs, fruits, insects, and also tree sap. Tree sap happens to be the major part of their diet, and is likely for the aforementioned mouth adaptation. They are unlike the other marmosets in that the Silvery Marmoset is habitat restricted and very isolated due to many factors. The Silvery Marmoset is also one of the smallest of the new world monkeys, as they are about the size of a squirrel. Additionally unlike other new world monkeys who have claws/nails on all digits (hands and toes) the Silvery Marmoset has claws on all of their toes except the big toe. They are very territorial and can be found living in colonies, where most of the time they remain close. When they are scared or an intruder comes into their areas the first reaction is to attempt to scare the intruder away with yelling and making faces, along with lowering their eyebrows and smacking their lips. If this fails, their speed in the trees is more than enough to get away.

They spend most of their lives in the trees, and guard them jealously. Their original habitat was dense rainforest, however because of logging and the creation of plantations the Silvery Marmoset has adapted to a new lifestyle, rather than take the turn to extinction. They will curl up in hollows of a tree at night for shelter and for sleeping, while also taking advantage of structures in old plantations or abandoned areas that are no longer farmed. The gestation period of the Silvery Marmoset is about 4-5 months and the mother will usually give birth to two, but sometimes three, young. When they are small, the entire colony will help in raising the young; however in six months the young are weaned and will mature until they are two years of age.

The Silvery Marmoset belongs to the subgenus Mico, which contains the rest of the Amazonian Marmosets, the genus Callithrix which has three other subgenus of Marmosets, the subfamily Callitrichinae which holds three other genus (which tamaris are a part of), the family Cebidae (of which squirrel monkeys and many others are a part of) and belong to the Parvorder of Platyrrhini - which is all the new world monkeys living in the western hemisphere. Above this is the infraorder Simiiformes, of which we are also a part of, as this contains all the higher apes as well as the new world monkeys.

Here are some interesting facts about Silvery Marmosets:


Picture of the silvery marmoset by Nick Woolley, licensed under Attribution ShareAlike 2.5