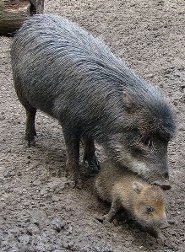 The white-lipped peccary (tayassu pecari), has gained a reputation in Central and South America as the most dangerous of the peccary species. The question should be asked, "Who is dangerous to whom?", because peccaries do not seek to be in contact with humans. People native to Central and South America still hunt peccaries for food, and people have already cleared away acres of rainforest in order to build competitive new industries or to feed cattle. White-lipped peccaries will stand their ground against anyone who gets too close to their territory. The White-lipped peccaries' preferred territory is within a rainforest, and since this territory has been rapidly shrinking, why shouldn't they defend it as aggressively as they can?

A white-lipped peccary is rather small to be such an aggressive animal. An adult peccary will stand from 40 to 60 centimeters at the shoulder (1.3 to 1.96 feet), with a body length between 90 and 130 centimeters (3 to 4.5 feet), and a weight from 25 to 40 kilograms (55 to 88 pounds). (Mayer,J.J., and R.M. Wetzel.1987. Tayassu pecari.mammalian species;293:1-7)) This animal does not have claws like a bear or a puma. It uses its sharp tusks as a defense. Even with sharp tusks, a lone peccary would not have gained a reputation for aggression. White-lipped peccaries like to travel in large herds, and some of these herds can exceed 300 in number. If one individual within a herd is attacked, the entire herd will run to defend the injured individual.

The white-lipped peccary has a large range, from southeastern Mexico to northern Argentina, mostly in undisturbed rainforest. Its numbers have sharply declined in Central America and Mexico, and it is already considered extinct in El Salvador. Mike Boston and others in Costa Rica consider it to be a threatened species because of continued hunting.(Mike Boston-Osa Safari:The White-Lipped Peccary-in Osa Aventura)

The white-lipped peccary forms larger herds than any of the other peccary species that share some of its territory. These large herds, rarely smaller than 50 individuals, make it difficult to gain a consensus that the white-lipped species is endangered. These large herds can often be smelled before they are seen, since they have a skunk-like odor. A large herd of white-lipped peccaries can also be very noisy when threatened. They "bark" and they make chattering noises with their teeth. With their smell and noise and numbers, these peccaries can appear to be more of a threat to humans than humans are to them.

Much of the white-lipped peccary's former rainforest habitat has already disappeared, being replaced by industrialization and the preparation of grazing land for cattle. These relatively new land uses have threatened peccary populations far more than any group of hunters ever did. Hopefully, more people will learn to respect the warning barks of the white-lipped peccary, and let this guardian of the rainforest keep what is left of its territory.

Picture of the white-lipped peccary by Chrumps, licensed under GFDL

The White-lipped peccary is listed as Least Concern (LR/lc), lowest risk. Does not qualify for a more at risk category. Widespread and abundant taxa are included in this category, on the IUCN Red List of Threatened Species

Some facts about the
White-lipped peccary