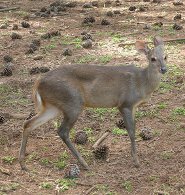 The Gray brocket (Mazama gouazoupira) deer has a grayish-brown coat, and the underside of its tail is white. When fully grown, gray brockets average a weight of 17 kg, or 37.4 lbs. They measure approximately 850 to 1050 mm, or 41.34 to 33.46 inches. Male gray brocket deer have antlers measuring from 70 to 100 mm. The gray brocket makes its home in Bolivia, Argentina, Colombia, Brazil, French Guiana, Ecuador, Peru, Guyana, Trinidad and Tobago, Suriname, Venezuela and Uruguay and prefer open areas, such as the thorn scrub in Venezuela and may be found in arid regions, swamplands, savannas, or on the borders of transitional forests.

The gray brocket deer reproduces year round. Does have been found pregnant and lactating simultaneously, and spotted fawns may be found all through the year. Gestation averages eight months. Generally only one offspring is born at a time, twins occur rarely.

The average lifespan of gray brocket deer is 13 years in the wild. Rarely seen in groups of three, they are solitary animals, preferring cover during the day and to feed in the open only at night. Female home ranges overlap, but male home ranges are exclusive.

Gray brocket deer communicate through scent-marking, including defecation, urination, thrashing, and forehead rubbing. Females and juveniles have been known to mark more often inside their home range than males, who usually mark outside their range. Other communication methods include posture, visual signals, physical contact, and some vocalizations.

Mostly frugivorous, gray brocket deer prefer fleshy fruits from bush-like trees during the wet season. They feed on tough fruit from the Casesalpinia paraguarensis and the Zyzyphus oblongifoia trees during the dry season. This fruit is dry and tough. In regions like the Chaco, water is more scarce during the dry season, so the deer eat more bromeliad and cacti fruits, in addition to succulent roots and leaves, to fulfill their need for water. They also eat twigs, buds, flowers, bark, and tree or shrub leaves. Because of the type of food they eat, they disperse seeds from many plants. Due to predators’ reliance on these deer for food, they may affect predator populations.

Predators of gray brocket deer include jaguars, ocelots, domestic dogs, mountain lions, humans, and large raptors. They are listed on the IUCN Red List of Threatened Species as Data Deficient, which means there is inadequate information for directly assessing its risk of extinction.

The Brown brocket, gray brocket is listed as Data Deficient (DD), inadequate information to make a direct, or indirect, assessment of its risk of extinction, on the IUCN Red List of Threatened Species

Some facts about the
Gray brocket