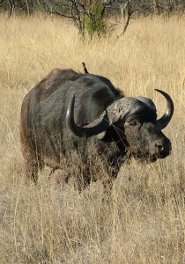 The African Buffalo's (Syncerus caffer) range stretches from North of South Africa to the south of Sahara Desert. Its main habitat mainly includes arid biomes and areas around rivers, swamps, and lakes. It is also found in open woodland regions.

The African buffalo is quite a heavy and large animal. Its weight can range from 500 kg (1100lbs) to 900 kg (1980 lbs) and its average weight is about 700 kg (1540lbs). Its total length from head to back can be around 2,100-3,000 mm and the length of the tail is around 750-1,100 mm. The height of African buffalo ranges from 1m to 1.7 m. This species has a very large head and strong limbs. Its chest is broad and ears are droopy and large. There is not any specific shape for its horns. They can spread outwards, downwards, or upwards. The two horns of the males are joined at the tip by a boss and they work as a shield covering the head. The various subspecies are found with different sizes such as the S.C.Caffer is double the size of S.C.Nana. The African buffalo is found in both black and brown colors. The young buffalos have thick covering of hair on their body but with age, they start losing hair and in old age, there is very little hair left on their skin. It can occur the year around but seasonal rainfall can also influence the reproduction process. The Serengeti Plain experiences rainfall during February to July and at the end of the wet season, the conception period of the African Buffalo begins. The calf takes birth in the second half of the next wet season.

For 23 days, females remain in heat and the estrus period lasts for 5 to 6 days. Once the female has conceived, the gestation period is for 340 days, almost one full year. The female gives birth only to one calf at a time which weighs about 40 kg at birth. Male babies live with mother for only two years and then, leave the mother to join a bachelor buffalo group. Females do not leave the mother up to the time they are able to produce younger ones. A male reaches sexual maturity when it is 3 to 4 years old while a female attains maturity at the age of 5 years.

The African buffalo is a highly sociable animal that travels in large groups. These groups include females and the young calves they had given birth in the past two seasons. 3 to 4 males form a bachelor group during the dry season. There is also a dominance hierarchy within this group. There are fights among the members of every group for an estrous female. African buffalos are considered exceptionally powerful and they can run at a very high speed that can go up to 57 km/hr.

Picture of the African buffalo by Paul M Rae., licensed under GFDL

The African buffalo is listed as Conservation Dependent (LR/cd), the focus of a continuing taxon-specific or habitat-specific conservation programme targeted towards the taxon in question, the cessation of which would result in the taxon qualifying for one of the threatened categories below within a period of five years, on the IUCN Red List of Threatened Species

Namings for the African buffalo

Some facts about the
African buffalo