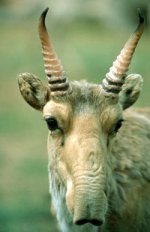 The Saiga (Saiga tatarica) communities are found in 3 places, all within the Asian continent: Kalmykia, Kazakhstan and Mongolia. They stay in semi-desert areas and dry steppes, but herds could be found in those grassy territories that have no hills or rugged areas.

Mass of a typical Saiga is thirty to forty-five kilograms. Its weight is nothing spectacular though, what is spectacular is its head, possessing a mobile nose hanging over the mouth area. Male Saigas have two long colored horns, and save for the horns/snout, it actually just resembles a sheep, a small one at that. These antelopes have long legs, supporting a body which could be considered as robust. In summer time, a Saiga's coat would be yellow-red (back) while the belly side is of pale color. When winter comes though, their covering turns thicker.

When we speak of reproduction and weaning, here are what you should know: number of offsprings at a given birth are from one to three. The Saiga's gestation time frame can go all the way to 152 days. The females attain sexual maturity in just seven months, whereas the males would reach the same point in 2 years' time. Pregnancy period is five months, while lactation goes much shorter than that, 4 months. Under captivity status, it has been noted that young Saigas would even nurse from adults that are actually unrelated to them. Bloody fights occur between 2 opposing males, and when I say 'bloody, one of the two usually gets killed at the end. Migration-wise, it is not often, but it happens if snowstorms for example are in progress.

Interesting fact: Saiga's horns are considered as precious commodities, these are crushed and often used in some forms of medicine (Chinese kind).

The Saiga antelope, saiga is listed as Critically Endangered (CR), facing an extremely high risk of extinction in the wild, on the IUCN Red List of Threatened Species

Some facts about the
Saiga