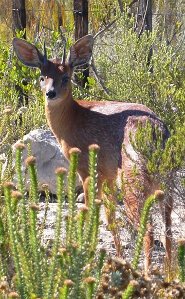 The Cape grysbok (Raphicerus melanotis) is a small antelope that is endemic to South Africa. Though a relatively common species, it is rarely seen as it is very wary and avoids human contact when possible.

Cape grysboks have stout bodies perched on short, relatively delicate legs. This antelope's front legs are shorter than its back, giving the animal a sloping appearance. The coarse fur on the cape grysbok's back and sides is a mingling of red and white hair, while its underside is a lighter color. These antelopes have large ears and big, expressive eyes, and the males have short, thin horns.

Typically, cape grysboks stand about 540 mm at their shoulders, which is approximately 21.5 inches tall, and they weigh about 10 kg or about 22 pounds. The main feature that distinguishes cape grysbok from other grysbok and small antelope species is a set of false hooves that it has above the real hooves on its hind legs.

These tiny antelope are only found in the Western Cape and Eastern Cape provinces of South Africa. They prefer to browse on open plains that are near the shelter of thickets and dense shrubs that can provide them natural cover from predators. Though not as typical, some cape grysboks will live in areas where there is only tall grass to provide shelter.

Cape grysboks are, for the most part, browsers. They dine on grass and the leaves of bushes, trees and vines, as well as fruit. These small antelopes adapt pretty readily to habitat changes, which can sometimes lead it into trouble, especially when they decide to dine on the crops of farmers. Their penchant for nibbling on fruits in orchards and shoots of vines in vineyards has made them unpopular guests in some areas. The cape grysbok does not need a ready source of water and is reportedly able to survive for a period of time without drinking.

The cape grysbok is a nocturnal animal, sleeping during the day and coming out in the evenings to graze. They are also typically solitary in nature. Male cape grysboks are territorial and mark off their territory by means of scent markers to warn others males to stay away.

Because the cape grysboks are small, they are easy prey for many animals, including mammals such as jackals and leopards, as well as large birds of prey and snakes. Habitat destruction is another problem that cape grysboks face. Unfortunately for the cape grysbok, it's not just humans that wreak havoc on its habitat. Elephants in the Addo Elephant National Park, for instance, have managed to destroy much of the thickets in which the cape grysbok prefers to shelter.

Cape grysboks give birth to one baby at a time, usually in the spring. If conditions are ideal, a female may give birth to two babies in one year. Babies, which are known as lambs, are born with a darker coloring than their parents. Cape grysboks, being fairly common, are currently listed as Least Concern on the IUCN's Red List.

Picture of the cape grysbok by Jimfbleak, licensed under GFDL

The Cape grysbok is listed as Conservation Dependent (LR/cd), the focus of a continuing taxon-specific or habitat-specific conservation programme targeted towards the taxon in question, the cessation of which would result in the taxon qualifying for one of the threatened categories below within a period of five years, on the IUCN Red List of Threatened Species

Some facts about the
Cape grysbok