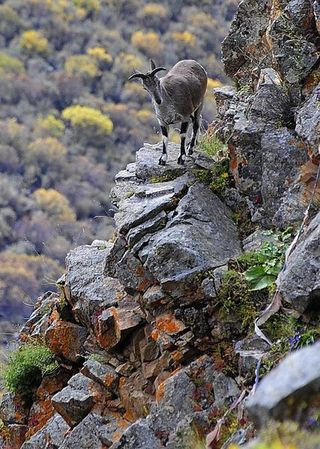 The Bharal, blue sheep is listed as Least Concern. Does not qualify for a more at risk category. Widespread and abundant taxa are included in this category, on the IUCN Red List of Threatened Species

Some facts about the
Bharal

Facts about the bharal

Blue Sheep or Pseudois nayaur is listed on the IUCN Red list (1996) as Least Concern .

In Pakistan the Bharal is only found in the remotest northern region of the north-eastern border region of Hunza and on the eastern watershed of the great Baltoro Glacier system in Baltistan.

It has characters intermediate between the sheep and the goats, Bharals are found at altitudes of 3600 m to 5000 m and feed on the rich and abundant grass on the alpine meadows.

The Bharal is known as the Himalayan blue sheep though strangely enough, it is neither blue nor is it a sheep.

The Name "Bharal": "Bharal" is Hindi for "Indian.

The bharal is a major food source of the Snow Leopard. (Wiki)

However, in spite of of its name, the Bharal is neither blue nor a sheep. (Full text)

Conservation Status The bharal is considered a low risk, near threatened species by the IUCN (1996). (Full text)

Blue sheep (Pseudois nayaur) is an ungulate widespread in the eastern part of the Tibetan Plateau. (Full text)