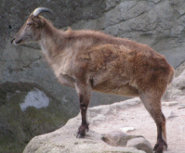 The Himalayan Tahr (Hemitragus jemlahicus) is an animal that is classed as "Near Threatened" and is expected to become a threatened or vulnerable species in a few years. The Himalayan Tahr has a small head, large eyes, and pointed small ears. Their hooves are well adapted to climbing rocks, mountains, and hills, and their hooves have a special adaptation that has a rubber-like core that is flexible which lets them grab onto smooth rocks – and also wedge into sharp areas with the rim of their hooves. They weigh between 300 to 400lbs in weight (130-180kg) and are usually 4 – 5.5 feet in length (1.2 - 1.6m) and are 2 to 3 feet in height (60-90 cm). Their diets consist of shrubs, small plants, and small trees. They usually gestate for six months, and have one kid at a time. The younglings stick with their mother for up to two years, and can live to be 15 years of age.

Recent DNA evidence and genetic testing has shown that the three types of Tahr may not be related as closely as once figured, with the Himalayan Tahr being left in its own Genus, and the other two species moved to their own genera. This species of Tahr has been inadvertently introduced to habitats that it is not originally from, and a feral population in the South Island in the country of New Zealand, has become a particular pest. Feral herds have been reported to cause damaged to natural habitats due to their nature of browsing and eating many of the local vegetation that would otherwise be used by the native population of animals. Other places and habitats that it has been introduced and allowed to populate range from California to New Mexico in the United States, Ontario in Canada, and also in South Africa.

The Binomial name and species of the Himalayan Tahr is Hemitragus jemlahicus, with it being the sole member of its Genus Hemitragus. Hemitragus belongs to the Subfamily of Caprinae within the Tribe Caprini. In the Caprini Tribe the wild goat, domestic goat, domestic sheep, and the other tahrs are members, along with other relatives. Within the Subfamily it is related to the Musk ox, and takin of the Ovibovini Tribe, and the serows, gorals, mountain goats, and chamois of the Naemorhedini Tribe. Caprinae belongs to the Family Bovidae which are called the bovids. Bovids are a large and varied family, which include many different species like cattle, sheep, goats, and many more. This belongs to the Infraorder Pecora which has species like giraffes, pronghorns, deer, and a large number more. Pecora in turn belongs to the Suborder Ruminantia, of which only one other Infraorder exists (that is not extinct or unknown) which has just 6 living species; Ruminantia is also the means that all members are ruminants and have complex digestive systems. Ruminantia belongs to the Order Artiodactyla, of which all the even toed ungulates belong – even toed ungulates walk on two or four digits, like pigs, cows, and camels. Artiodactyla belongs to the Superorder Laurasiatheria, of which many orders, suborders, families, and species are members, from the carnivores to the fruit bats, and horses. Laurasiatheria belongs to the Infraclass Eutheria which is all placental mammals (you and I included) and that belongs to the Subclass Theria, which combines the Placentals with the Marsupials and 99.9% of all living mammals (kangaroos, koalas and many more), however this does not include the Monotremes.

Interesting Fact about the Himalayan Tahr

The Himalayan Tahr has become such a pest in New Zealand that it is legal and encouraged to hunt them.

Picture of the Himalayan Tahr by Michail Jungierek, licensed under GFDL

The Himalayan tahr is listed as Vulnerable (VU), considered to be facing a high risk of extinction in the wild, on the IUCN Red List of Threatened Species

Some facts about the
Himalayan tahr