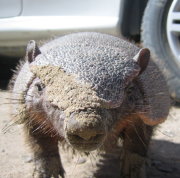 The pichi (Zaedyus pichiy), also known as the 'Dwarf Armadillo', lives in southern most portion of South America (South Argentina, Chile). They have very small ears, well developed claws and a dark brown armor with whitish lateral edges and a yellow tail. They dig burrows, but can be found above ground during the day and night. They are primarily nocturnal and solitary creatures and can enter a state of torpor in the winter.

They dig shallow holes for shelter and to protect them from predators. When they are threatened, they pull their arms and legs inside their armor, so that their armor touches the ground. This way a predator cannot get to the softer underbelly.

Their diet consists of insects, plant matter, carrion, worms and have also been seen eating rodents and lizards

Interesting fact: Pichis have a variable body temperature of about 24 to 35 degrees Celsius

The Pichi is listed as Near Threatened (NT), is close to qualifying for or is likely to qualify for a threatened category in the near future, on the IUCN Red List of Threatened Species

Some facts about the
Pichi