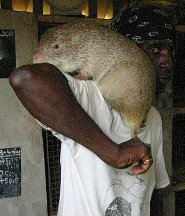 There are two species of the cane rat and the Greater Cane Rat (Thryonomys Swinderianus) is the larger among the two (surprisingly!). The length of the greater cane rat is about 67-79.2 cm (26.1-30.9 inches). It weighs around 5 - 6.5 kg (11-14.3 lbs). In few cases, these cane rats have been found to weigh as much as 9 kg (19.8 pounds). Males are generally larger, they have massive heads and a powerful and stocky body. They have small but broad fur-covered ears. The most striking feature of greater cane rats is that they have oversized, bright, and orange-colored incisor teeth. The coat has coarse, thick, and pointed hair that varies in color. It is brown on the upper side and the underneath color is much lighter. The color of genitals of a mature cane rat is orange. The hind feet are bigger than the fore feet and they have quite large and well-shaped claws.

The life span of greater cane rats in the wild is short but in captivity, they can survive up to four years of age. These cane rats are considered good swimmers and are found in the marsh areas near streams and rivers. They favor low-lying, marshy areas along riverbanks and streams where dense tall grass and reeds are found. They occur in Uganda, Kenya, Malawi, Tanzania, Zimbabwe, South Africa, Angola, Namibia, Mozambique, Botswana, Sudan, Gambia, and Cameroon.

The tender new shoots of elephant grass are the primary food of greater cane rats. They also feed on guinea grass, kikuyu, pennisetum grass, plant stems, and roots. They also eat fruits, nuts, and bark of trees in small quantities. They eagerly hunt for vegetables in the fields and are avid consumers of such crops as pumpkin, sweet potato, millet, peanuts, maize, cassava, sorghum, wheat, and cane sugar.

The greater cane rat is a nocturnal and solitary animal. It lives in family groups of adult males, females, and their young ones with the male rat being the dominant member of the group. The gestation period of these cane rats is 152 to 156 days and the female normally gives birth to 2 to 4 pups at a time. Greater cane rats get frightened easily and immediately run towards water to outsmart the predator, since they are excellent swimmers and thus, it is easier for them to escape any danger, once in water.

Like their other smaller counterparts, the greater cane rats are also considered a hazard to the food crops and are viewed as an important food source by humans. Since these animals are found in abundance in almost all places wherever the habitat is suitable for their survival, they are not considered as threatened.

The Greater cane rat is listed as Least Concern. Does not qualify for a more at risk category. Widespread and abundant taxa are included in this category, on the IUCN Red List of Threatened Species

Namings for the greater cane rat

Some facts about the
Cane rat