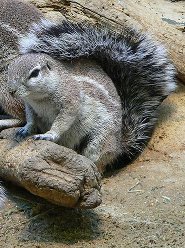 The South African Ground Squirrel (Xerus Inauris) is also known as the Cape Ground Squirrel in England. In French, it is called Écureuil foisseur de cap and in German, it is known as Kap-erdhornchen. The length of this squirrel is 28 to 38 cm (11 to 15 inches) and it weighs about 500 to 1100 gm (1.1 to 2.4 lb). The color of its coat is tawny yellow and there is a white strip on both sides of the body. There are two dark bands on its tail.

The South African Ground Squirrel does not hibernate. These squirrels are very social and live in groups with about 1 to 3 females and 2 to 3 males. Sometimes, the number of males can exceed up to 9 with some sub-adult females. An interesting thing about this breed is that mature males like to form their own groups and there can be 19 to 20 individuals in one group. These groups are called bands. Their home range is shared with other groups which is actually quite a surprising thing, since in case of most of the mammals there is generally an extremely tough competition to get the female. The group-living instinct of this species gives it a survival opportunity from predators overweighing the disadvantage of breeding opportunities which come from competition.

Breeding in South African Ground Squirrels is asynchronous and there is no specific period of breeding although very few litters are seen above the ground in the months of July to October. Gestation period lasts for 48 days and the young ones are weaned after 52 days. There are one to three babies per litter. A female becomes sexually mature when she is 10 months old and a male matures at the age of 8 months. Although a female has the capability to breed throughout the year, less than 10% reproduce more than one litter in a year.

The South african ground squirrel is listed as Least Concern. Does not qualify for a more at risk category. Widespread and abundant taxa are included in this category, on the IUCN Red List of Threatened Species

Some facts about the
South African ground squirrel