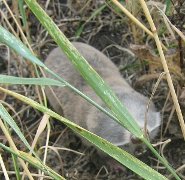 The Greater mole rat (Spalax microphthalmus) is a rodent species in the Family Spalacidae. It is tailless and completely blind. The eyes are enclosed in skin and have reduced lens cells that completely impair its vision. It has two prominent incisor teeth that it uses to burrow. The color of its fur is grey but may vary to different shades depending on the immediate habitat. It weighs about half a kg or 500 grams (1lb) and measures about 31cm / 12.2in in length.

The greater mole rat rarely ventures out of its burrow during the day, tending to appear at night to forage for food. They live solitary lives apart from the mating season when they pair up to conceive offspring. The rodent feeds on underground parts of plants, mostly dandelions, cow parsnip, tree seedlings and chicory. It can store up to 15kg / 33lbs of vegetables underground during winter; quite a feat for such a small fellow.

A striking difference between the greater mole rat and the common mole is that its front feet are not developed for digging. This is because it digs with its prominent incisor teeth, something that makes it unique in the mammalian group of animals.

The greater mole rat is finds its home in Eastern Europe. This is more precisely in the steppes and forested steppes of Ukraine and South Russia. This subterranean species prefers the lowlands which have black earth while avoiding loam rich and sandy soils. Favoring vegetables as its staple feed, it inhabits farm land and forest belts. This makes it quite a pest for farmers in the area, especially those cultivating melons and other horticultural crops.

Conservation efforts have seen some of the greater mole rat habitat cordoned off as protected conservancies and this has proven enough to maintain the population at a steady, sustainable number. Nevertheless, its vulnerable status still means it has to be monitored to ensure the species remains stable in its existence.

Picture of the greater mole rat by Saiga20K, licensed under GFDL

The Greater mole rat is listed as Vulnerable (VU), considered to be facing a high risk of extinction in the wild, on the IUCN Red List of Threatened Species

Namings for the greater mole rat