The Potto: The Nighttime Adventurer who moves Softly-softly 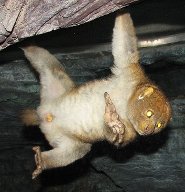 Potto (Perodicticus potto) is the name given to a family of strepsirrhine (wet, curly nostrils) primates known as Lorisidae. In some English-speaking parts of Africa, it is known as Softly-softly for the way it moves without making a sound. It is a relatively small animal, weighing in at about 3 pounds/1.5 kg and reaching an average length of 12-14 inches or 30-40 cm. It has a relatively small head in comparison to the rest of its body, suggesting a lesser intelligence.

There are several unique features to this animal’s anatomy. Three of the vertebrae in their neck have sharp points that almost pierce the skin and are used as a defense. If confronted, the potto will turn and hide its face and neck-butt the opponent. They do bite on occasion. The saliva of a potto has inflammatory properties, causing swelling at the site of the bite. Another notable feature is the opposable thumbs which help them to firmly grasp the branches of a tree. The index finger is considered to be a primitive feature that no longer serves a purpose. Pottos move slowly and quietly, always using at least 2 limbs to grasp a branch.

Pottos are nocturnal animals, moving around at night and sleeping in the leaves during the day. They typically live in the rainforests in tropical parts of Africa, very high up in the trees. This is the primary reason it has so few predators. They almost never come down from the trees, and no predators that can get as high as the treetops they inhabit. Birds of prey in this region are diurnal, hunting only during the day. The only real threat to pottos is to those who live near villages because they are hunted for bushmeat. Pottos themselves subsist on a diet primarily made up of fruit, tree gums, and insects, in that order. Some have been known to eat bats, but this is not common.

These primates emit an odor not unlike the smell of curry from their scent glands located underneath the tail. The courting ritual is a mutual grooming session while hanging upside down. They lick and comb each other’s fur with their claws and teeth, marking each other with their scent glands. Mating is face to face and upside down. Once impregnated, the gestational period lasts for approximately 170 days, producing only a single offspring. A baby potto is not fully mature until 18 months of age.

The potto is Class B of the African Convention which only allows it to be hunted or captured with special authorization from the government. International trade is also strictly controlled. The only real threat to the pottos’ lifestyle is habitat loss stemming from aggressive logging and agriculture. They can live in any type of tree. But they can’t live anywhere without them.

Picture of the potto by Ltshears at the Cincinnati zoo, licensed under Creative Commons Attribution 3.0 Unported

The Potto gibbon, potto is listed as Least Concern (LR/lc), lowest risk. Does not qualify for a more at risk category. Widespread and abundant taxa are included in this category, on the IUCN Red List of Threatened Species

Some facts about the
Potto