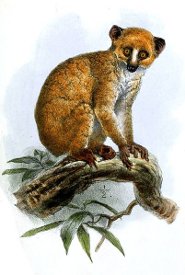 The Calabar angwantibo (Arctocebus calabarensis) is sometimes called the Calabar potto due to its close relation with the Pereodictus potto. The animal is classified as a strepsirrhine primate of the Lorisidae family. The animal can be found in the rain forests of west Africa, covering a range of Cameroon, Nigeria and Equatorial Guinea.

Orangish-yellow on its back with grey or white fur on its belly, the primate has a white line traveling from the tip of its nose to its forehead. With his wide, round eyes, the Calabar angwantibo is a beautifully startling animal to look at. The animal has a very short index finger which makes it easy to grip branches and a second toe with a specialized claw which is used for self-grooming. Interestingly, the Calabar angwantibo is the only primate in the world to have a third eyelid (nictating membrane); like those you see in cats and dogs.

At maturity, the angwantibo weighs between 266 and 465 grams (9.38 to 16.4 ounces). The tiny primate is active by night and spends most of its life in lower part of the trees than its primate cousins, hovering between 5 and 15 meters (16.4 to 49.21 feet) above ground. The angwantibo spends his day sleeping whilst hanging from a tree branch. At night, the primate hunts for its staple diet: insects. Though the angwantibo is not a picky eater, it does favor caterpillars above any other insect in the jungle.

The male angwantibo is a solitary hunter and has a range to himself. His range, though, does overlap the range of several females with whom he forms a social bond. The animals mate upside down, whilst hanging from a tree branch during the final phase of the female angwantibo’s estrous cycle. After a gestation period of approximately four months, a single infant is born.

When confronted by a predator, like the small carnivores and other natural predators of the African jungle, the angwantibo curls into a ball with its head tucked into its armpit. Mouth open, the primate is ready to bite and hang on if the predator persists in its attack. The angwantibo is considered of least concern when it comes to threat level as they have great numbers and man interferes with them very little. Primary threats to the species are its natural predators and deforestation.

The Angwantibo, calabar angwantibo, golden potto is listed as Near Threatened (LR/nt), is close to qualifying for or is likely to qualify for a threatened category in the near future, on the IUCN Red List of Threatened Species

Some facts about the
Calabar angwantibo