The Beautiful Fork-Marked Lemur of Madagascar 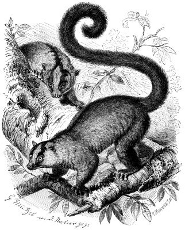 The Fork-marked lemur (Phaner furcifer) is a primate found in Madagascar. They tend to live in two main parts of the country, including the humid forests of the eastern portion of the country as well as the dry and temperate forests in the western part of Madagascar. They spend a majority of their time in gum-producing trees, where they live and eat. The fork-marked lemur is known for their harvesting skills of gum trees in this region. They also possess a dental comb, which is a row of teeth on the lower jaw that allows for gum to be extracted from the trees. The fork-marked lemurs also eat some insects, although to a lesser degree than they consume gum.

As a rule, the fork-marked lemur lives in a monogamous relationship with their mate. Once bonded, the lemurs live together in a hole in a tree and share their lives there. They reproduce only with one mate at a time. Both males and females participate in the raising of offspring, although the females tend to play a larger role in the lives of young ones than males do. This is a similar trait found in many primates, including other lemurs.

Many are dying because of deforestation in their homelands. Lemurs are tree-dwelling creatures, and forestry has become a popular industry that is taking the lives of these animals. For this reason, the fork-marked lemur is rapidly becoming more and more endangered each year. Among potential predators are carnivorous tenrecs, fossas, and herpestids native to Madagascar. These lemurs are also likely to fall victim to snakes and birds of prey.

The average life expectancy for the fork-marked lemur is around twelve years. One infant is born to a lemur pair each season, and infants are expected to live with their parents until able to fend for themselves. Actual life span has decreased greatly since many lemurs have no trees to live in while in the wild, but lemurs who are under the care of humans tend to live around twelve years.

These lemurs are most commonly known for their distinct markings on the face. The fork-marked lemur is named for its two black stripes that run from the eyes to the tip of the snout, making the animal stand out among its other lemur counterparts. These lemurs also possess large, bushy tails that can be between 29 and 37 centimeters long.

Namings for the forkmarked lemur

A forkmarked lemur group is called a 'troop'.

Some facts about the
Fork-marked lemur