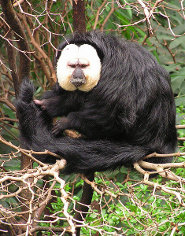 The Guianan saki (Pithecia pithecia) or White-faced saki is one among several species of saki monkey from the New World. It is a small, shy monkey that rarely touches the ground and prefers a quiet family life. However, it can roar with power to protect its territory and leap through the air from tree to tree for up to 10 meters.

It lives with its lifelong mate in the understory and lower canopy of the rainforests in northern and central South America. It lives in Brazil, French Guiana, Guyana, Suriname, Venezuela and Peru. In its family group it communicates with twitters and shrill cries which are unique for each family, however, it can roar to warn other animals and saki monkey families away from its territory. The Guianan saki monkey does not swing through the trees by its tail, because it does not have a prehensile tail. It mainly walks on all fours but does stand on two feet to jump between branches.

Parents and offspring move together (called a federation) and protect their territory. They groom each other, which creates a bond in the family and often older siblings will care for the young ones. Adults weigh approximately 1.48 kg (3.256 lbs) and are 30 to 50 cm long (11.81 to 19.69 in). Their long, bushy tail doubles their size. They live up to 36 years. They have one offspring at a time, once a year. There is no season for mating, it happened throughout the year. The gestation is from 150 to 180 days. It is easy to tell the difference between the males and females. The males have black fur with, a reddish-white face and females have shorter hair with brownish-gray fur and light brown stripes around the nose and mouth. Their fur fringes around their foreheads and looks like little hoods.

They eat fruits, flowers, insects, leaves and nuts and spend much of the day resting. In Guiana, White-faced saki have been seen looking into tree hollows and collecting bats which they tear apart and eat. Eating and playing during the day, at night they curl up like cats and sleep in the tree branches. The biggest cat of the rainforest, the jaguar, would prey on Guianan saki monkeys, but they are themselves endangered.

Picture of the guianan saki by Skyscraper, licensed under Creative Commons Attribution 3.0 Unported

The Golden-faced saki, guianan saki, white-faced saki is listed as Least Concern. Does not qualify for a more at risk category. Widespread and abundant taxa are included in this category, on the IUCN Red List of Threatened Species

Some facts about the
Guianan saki