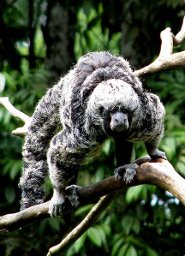 The Gray monk saki (Pithecia irrorata) is a primate found in South America, primarily in the tropical rainforests of Brazil, Bolivia and Peru. Known for its thick muzzle, a bare face and a curly coat, this arboreal mammal has also been seen in forest patches and drier forests but rarely ventures beyond its home. Although dark in coloring, the Gray monk saki is actually named after the taxonomist who introduced the species in 1842.

Also known as the Bald-faced saki, this omnivorous primate subsists of seeds, leaves, and insects. The multi-layered lowland forests they inhabit promote year-round reproduction of nutrients and foliage, ensuring a constant availability of food. Gray monk sakis are well-known foragers of fruits which are heavily protected by hard casings, such as Brazil nuts. Unripe fruits are even preferred to ripe offerings. Sharp incisor teeth and large canines are used to cut through the shells and obtain the fruit pulp within. Active during the day, the small primate uses all four limbs as it moves through its habitat, leaping vertically from trees, staying within a forested area. A bushy non-prehensile tail, which may grow longer than its head and body combined, is not used for climbing.

Social animals able to interact with neighboring families yet still defend territory when necessary, Pithecia irrorata live in clans. Formed groups can be as large as nine members, including one or two pairs of parents and their young. Monogamous mates communicate with each other by exchanging vocal sounds, employing different pitches to indicate danger or just basic social calls. Pregnancy may happen at any time, during any season. Females give birth to single offspring after a gestation cycle of 180 days, with a weaning period lasting about four months. There is no interbreeding among species of the genus Pithecia.

With a weight range of two and 6.6 pounds (3 kg), males weigh slightly more than their female breeding partners. Female faces have more hair however. The female’s frontal fur is also softer and heavier than a male’s coarse covering.

The Gray monk saki is considered a New World Monkey, with ancestry that dates back to Africa. As an arboreal creature living in trees, Pithecia irrorata do not have natural predators. Not endangered, the greatest threat to their existence is development and the presence of hunters, especially in Bolivia.

The Gray monkey saki, gray's bald-faced saki, vanzolin's bald-faced saki is listed as Least Concern. Does not qualify for a more at risk category. Widespread and abundant taxa are included in this category, on the IUCN Red List of Threatened Species

Some facts about the
Gray monk saki