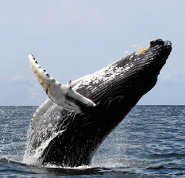 Humpback whales (Megaptera novaeangliae) are a once-endangered species of whale that was salvaged from the very brink of annihilation due to a moratorium on whaling in 1966. Before this their numbers had dwindled to an alarmingly low number – however today there are nearly 90,000 of them; although not as many as there once were, it is enough to insure the recovery and survival of these massive mammals. An adult Humpback Whale is usually between 45-50 feet in length (13-16 meters) and can weigh up to nearly 80,000 lbs – usually around 79-80 (36,000 kilograms). They have very large pectoral fins along with a narrow head, and are baleen whales (their teeth are like massive combs). Males of the species sing – or communicate – through sound transmitted across vast distances; these songs will usually last up to twenty minutes and it might have a role in mating.

Humpback whales travel thousands of miles every year in their migrations, and are found in all oceans on the planet. They feed during the warm summer up or down toward the poles, then they travel to the tropical waters in winter to give birth to their young. When they’re in the tropical waters they live off of their vast fat stores for energy, and migrate back to the polar waters to replenish the supply through feeding. Because Humpback Whales are baleen whales, their diet is of the smallest creatures in the oceans of the world – krill and small fish. Krill are shrimp-like arthropods that are very small, but their numbers are very large. They are the mainstay of the oceans, and if their weight was added up from just the Antarctic Krill it would outweigh all the humans on earth – twice. During blooms they can even be seen from space.

The Binomial Name for the Humpback Whale is Megaptera novaeagliae, as it belongs to the Megaptera genus, of which it is the only living member. Megaptera in turn belongs to the Family Balaenopteridae, which are all of the rorquals whales, of which there are two genera and nine species – eight of which are in the Balaenoptera genus which has all other rorqual baleen whales such as the Blue Whale, Fin Whale, Sei Whale and more. Balaenopteridae belongs to the Suborder Mysticeti of which all baleen whales belong to – living and extinct, and includes the Bowhead Whale, Southern and Northern Right Whales, Gray Whale, and Pygmy Right Whale. Mysticeti belongs to the Order Cetacea of which all whales, dolphins, and porpoises belong. A suggested Infraorder is Whippomorpha which would class the Hippopotamus with Cetacea and thus bring them into the fold. However, the next currently recognized step from Cetacea is the Superorder Laurasiatheria, of which bats, moles, hedgehogs, even and odd toed ungulates, anteaters, and carnivores are members. Laurasiatheria belongs to the Infraclass Eutheria of which all the Placentals are a member, and this belongs to the Subclass Theria of which all mammals that give birth to live young belong, and this belongs to the Class of Mammalia, which includes all the mammals.

Facts about the Humpback

Picture of the humpback whale by Wwelles14, licensed under GFDL

The Bunch, hump whale, humpback whale, hunchbacked whale is listed as Vulnerable (VU), considered to be facing a high risk of extinction in the wild, on the IUCN Red List of Threatened Species

Namings for the humpback whale

Some facts about the
Humpback whale