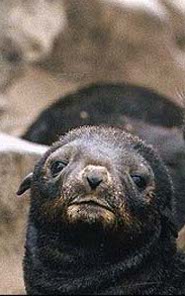 The northern fur seal (Callorhinus ursinus) are a type of marine mammals that makes up the largest members of the fur seal family. As the name implies, the majority of this breed of seal lives in the northern parts of the Pacific ocean, though they have been found traveling in the Bering Sea and Sea of Okhotsk as well, especially during the colder months. This is partly due to the abundance of food in the area, including the fur seal's favorite, pelagic fish and squid. Other fish may also be eaten, such as lantern fish or herring. The seals must be careful in both land and water however, as they are preyed upon by sharks, orcas, steller sea lions and even artic foxes.

One odd thing about the northern fur seals is how much the males differ from the females. It's not uncommon for male seals to be as much as 40% heavier than females, and also nearly five times as long. This doesn't prevent the species from breeding often however. Females reach their peak at an earlier date, around two to five years, while it takes males four to five. Strangely enough however, males usually won't attempt to breed until they're at least eight years of age. Like most seals, they were fiercely hunted for their fur, especially around the Alaskan and Russian area. This was increased ever farther in 1786, when a breeding ground was discovered. This resulting in the death of thousands of creatures. It's been reported that in the early nineteen hundreds, there were as little as 216,000 alive.

The seals have since bounced back and are now thriving. While the species is still on the "threatened" list, they have been upgraded to "Vulnerable," the highest level a creature can have while still remaining "threatened." If breeding continues as the current rate, the seals should have nothing to worry about.

When it comes to the male northern fur seal, nothing stops them from claiming the girl of their dreams. The seals are very protective of potential mates, sometimes doing more harm than good. It's not uncommon for two male to accidentally kill the female in the process while fighting, or playing tug-of-war with her.

The Northern fur seal is listed as Vulnerable (VU), considered to be facing a high risk of extinction in the wild, on the IUCN Red List of Threatened Species

Namings for the northern fur seal

Some facts about the
Northern fur seal