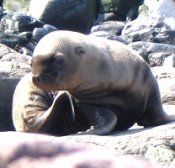 Steller sea lions (Eumetopias jubatus) also go by the name of Northern sea lion, it is the biggest breed of sea lions and among pinnipeds, its bulk size is just second only to the Elephant seal and walrus. The Steller sea lion has magnetized attention these past years due to alarming decrease in so many of their numbers in Alaska's territories.

The adult is lighter in hue than its cousins, range of colors is from yellow to an occasional red. The females are a bit darker than the opposite gender. The male Steller sea lion is just a bit longer than the distaff side and weighs more, from 600 to 1,100 kilograms. The males are also set apart by more pronounced foreheads, flat snouts and curlier hair at the neck.

Range of these sea lions: they are situated from the Kuril to Russia's Sea of Okhotsk to the Alaskan gulf and up to the A�o Nuevo Island. The Steller sea lion from the Kamchatka parts is called to be (under the) Western stock of its kind.

The diet of the Steller sea lion consists of a wide range of fish, mackerel, walleye pollock, salmon kinds, capelin, herring, rockfish, octopus and squids. It is also known that they could eat sturgeon, and very rarely, they feed on otter pups and the Northern fur seals. They have only one natural predator, the orca.

The pregnant female would give birth in their rookery (the birthplace/nest), and after a week staying at the rookery, the female would hunt for food, leaving her newborns alone. After some time, both mother and the young would leave their birth ground. However, since age is very variable for these sea lions, the newborns could stay with the parent for years (4 years had been recorded).

Interesting fact: Cases of a parent feeding her offspring who are at the same time feeding its own newborns have been noted, and this is a very rare action from the mammals' world.

Namings for the Steller sea lion

Some facts about the
Northern sea lion