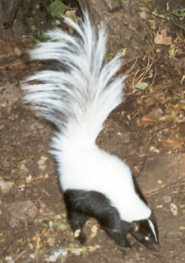 The Hooded Skunk (Mephitis Macroura) is quite similar to the striped skunk in terms of its appearance. The only difference is its softer and longer fur and a specific longer hair ruff on its upper neck. Generally, two kinds of color patterns are found in the hooded skunk. In one pattern, it has the white-backed phase along with chiefly white upperparts. There are two short, narrow white strips on every side just behind the shoulder and the underpants are mottled in white or are black. The other pattern is a black phase with black underpants and two lateral, narrow strips in white. The underside of the tail is frequently white; occasionally, the tail may be completely black but the base of the hair is always white in any case. In the first color pattern (white-backed phase), there is a broad band in white running from between its eyes and covering most of the upper and back portions of its tail; the white strip in this case never diverges as seen in the striped skinks.

Unlike hog-nosed skunk, the hooded skunk has finer fur, smaller size, longer tail, and small snout. Although its fur is very soft as compared to other skunks, it does not have much of a market value. The total length of an adult male is about 70 cm. It has a long tail measuring about 38 cm, and hind foot about 7 cm. The length of a mature hooded skunk female is about 65 cm, tail 37 cm, and the hind foot about 6 cm. A mature male usually weighs about 800 to 900 g, while a female weighs about 400 to 700 g.

The hooded skunk mainly belongs to Mexico and also occurs in some regions of Texas such as the Big Bend region, neighboring parts of Central Trans-Pecos. It is also found in Pecos, Brewster, JeffDavis, Presidio, Reeves and Ward counties.

The hooded skunk prefers intermediate elevations, mainly above the desert region and below the high mountains. It is found in closed-basin scrubs, desert scrubs, desert grasslands, riparian areas, and plains-mesa grasslands. It often makes rocky bulges of canyons and vegetation along the river banks its habitats.

The hooded skunk uses entangled vegetation on the streamside, rocky edges, and stream courses as its cover for protection. Since hooded skunks are a rare species in Texas, not much is known about its natural history. The breeding season of hooded skunks usually lasts from February to March. The female gives birth to two litters every year and there are three individuals in each litter. Its main food includes insects, but it also thrives on rodents and shrews and certain plant material such as pear fruit.

The hooded skunk is normally found to be nocturnal in its behavior. It is less aggressive than other members of its species while it is tapping or seeing humans. In order to protect itself, it takes shelter in burrows or in thick vegetations.

The Hooded skunk is listed as Least Concern (LR/lc), lowest risk. Does not qualify for a more at risk category. Widespread and abundant taxa are included in this category, on the IUCN Red List of Threatened Species

Namings for the hooded skunk

Some facts about the
Hooded skunk