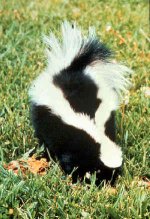 The Striped Skunk (Mephitis mephitis) is a skunk of the family Mephitidae found only in the Neartic. It is a very popular animal in the US and also in Canada as it occurs from Northern Mexico to US mainland up to Central Canada. Its habitat is mostly open areas grasslands, woods, and even clearings and it prefers to be near water sources. This skunk can also be seen in suburban places because buildings can give shelter.

Striped skunks have black fur and a white-colored stripe that is basically a single line from the tail's base, which then divides into two lines at the back's sides, and then ends with a triangle at the head. There is also a white-colored stripe from the forehead and goes down between the skunk's eyes to its snout. The length and width of the stripe varies with each skunk. The length of this skunk is from 575 to 800 millimeters, and its tail is between 173 to 307 millimeters. Meanwhile, its head is small complimented by small ears. It has legs that are short and a black and white tail that is fluffy and long. Its plantigrade feet have five toes that are partially webbed. The longer front feet claws are for digging.

The striped skunk is a nocturnal mammal that sleeps at day in burrows that are either other animals' deserted den, or a hole under a building, tree, or boulder.

Scent marking is the distinctive feature of a striped skunk. Its anal scent glands emit a very unpleasant offensive odor if the skunk wants to mark its presence, drive away threats, or mate. It arches its back and erects its tail and hair when threatened. Before releasing its signature scent, it first curls to the shape of a letter U with rump and head both fronting the enemy. It then shoots two streams of foul smelling fluid from its scent glands found in its anus that becomes a single stream after approximately 12 inches and a fine spray that can reach about 2 or 3 meters. The fluid can burn the eyes and also the nasal cavities and cause nausea.

The Striped skunk is listed as Least Concern (LR/lc), lowest risk. Does not qualify for a more at risk category. Widespread and abundant taxa are included in this category, on the IUCN Red List of Threatened Species

Namings for the striped skunk

Some facts about the
Striped skunk