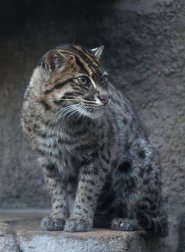 Unlike popular belief, not all cats dislike water. The Fishing Cat (Prionailurus viverrinus), not to be confused with the Fisher, is a strongly-built cat, having short feet and a big head. Fishing Cats have a olive-gray pelage with black spots. The back has a pronounced white center spot. Akin to the flat headed cat, the claws are shortened, yet the Fishing Cat has less established teeth. They can be found in mangrove swamps, creeks, oxbow lakes and reed beds of Bangladesh, Bhutan, Brunei Darussalam, Cambodia, China, India, Indonesia (Java, Sumatra), Lao People's Democratic Republic, Malaysia (Peninsular Malaysia), Myanmar, Nepal, Pakistan, Sri Lanka, Thailand and Viet Nam.

The gestation of the Fishing Cat is around 60+ days, the female Fishing Cats gives birth to one to four kittens. They eyes of the young open after the sixteenth day. Weaning is about 4 to 6 months old, and this young would attain adult size when it is around 9 months of age. At the tenth month, it would be independent from the parents.

Longevity of this cat in captivity is about 12 years on average. It is believed that they are loners, but there were observations that the male Fishing Cat is sometimes helping with the rearing of the newborns. They mimic insects by lightly tapping the water, so fish think there are insects on the water, attracting them. They can either swim and rush after it, or they could scoop it out using the paws. They could also go after mollusks, crustaceans, snakes and frogs. Next to that, they are know to include civets, wild pigs, dogs, goats, poultry and rodents in their diet.

The Fishing cat is listed as vulnerable, they are threatened by hunting and habitat loss. Wetland areas have been cleared by humans to make room for farmland and road, also pollution from industries make Fishing cats sick. But there is hope, fishing cats appear to adapt well to suburban habitats.

Interesting fact: The Fishing Cat can use its short tail as a rudder while swimming.

Picture of the Fishing cat by Opencage, licensed under Creative Commons Attribution ShareAlike 2.5

The Fishing cat is listed as Vulnerable (VU), considered to be facing a high risk of extinction in the wild, on the IUCN Red List of Threatened Species

Namings for the fishing cat

A young / baby of a fishing cat is called a 'kitten'. The females are called 'queen' and males 'tom '. A fishing cat group is called a 'clowder, clutter, pounce, kindle (young), embarrassment (young),'.

Some facts about the
Fishing cat