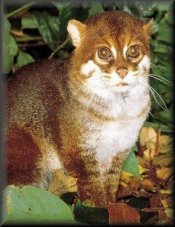 The flat-headed cat (Prionailurus planiceps) is about the size of a domestic cat, but possesses a flat but long head and round ears. The flat-headed cat looks similar to a civet and it is adapted to partially-aquatic living. Flat-headed cats have partial webbing on their toes, and this aids them in navigating through water. Also, their teeth face backwards to help the cat hold on to slippery prey, like frogs.

Around the year 1985, the flat-headed cat was classified as extinct, but luckily, they were not. In 1995 they were removed from the extinct list when they were spotted in Malaysia, Indonesia, and Thailand. The flat-headed cat's habitats are forests near rivers and river banks.

In the wild, the flat-headed cat is believed to be nocturnal, but in captivity they exhibit crepuscular (active at dusk and dawn) behavior. Their diet includes crustaceans, frogs, fish and, as a last resort, rodents.

Like most other cats, this cat is solitary, using scent to mark its territory. The size of a typical litter is between one and four kittens. In captivity, these cats have lived up to 14 years of age.

Because of their dependence on rivers and the fact that pollution is a growing problem in their habitats, it is assumed that the population of these cats is not thriving. Also, they will ignore a live sparrow even if this is within reach.

Image of the flat-headed cat by Alessio Marrucci, licensed under GFDL

The Flat-headed cat is listed as Vulnerable (VU), considered to be facing a high risk of extinction in the wild, on the IUCN Red List of Threatened Species

Namings for the flatheaded cat

Some facts about the
Flat-headed cat