The clouded leopard (Neofelis nebulosa) is found in the south-eastern part of Asia (see below for the range map of the clouded leopard). It weighs between 20 and 30 kilograms. The clouded leopard is sometimes given the nickname 'the modern day saber-tooth', because it has the largest canines compared to its body size of all cats. Another distinctive feature from other cat is its elongated skull. They are expert tree climbers and live large parts of their lives in the trees (in the Malay language the clouded leopard is called 'rimaudahan', which means 'tree tiger'). Their diet consists of goats, deer, domesticated livestock, wild pigs, reptiles, monkeys and birds. Clouded leopards are listed as an endangered species. Because of their secretive nature, their behavior is largely unknown.They are threatened by hunting (for Chinese medicine and its fur) and deforestation. Did you know it takes 20 to 30 cats to make on full-length fur coat? 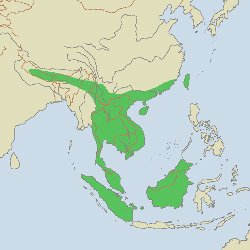 Update:Thanks to Ian T. for pointing out that the 'Clouded leopard' is actually two species, take a look at his blogpost.

The Clouded leopard is listed as Vulnerable (VU), considered to be facing a high risk of extinction in the wild, on the IUCN Red List of Threatened Species

Namings for the clouded leopard

Some facts about the
Clouded leopard