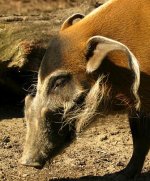 The Red River Hog (Potamochoerus porcus) is a pig family member that lives in Africa and Madagascar in the rainforests, mountains and brushes. There are thirteen recognized sub-species of the Red River hog. They are social animals. Both female and male adults are known to be solitary, most live in small groups of up to 11 individuals. However, there have been recordings of aggregation of over 100 animals. Although three to six individuals is common. Bush pigs are known to mark their paths by scraping tree trunks with their tusks as well as using foot glands, neck glands, and preorbital glands. Bush pigs fight by pressing their foreheads together, butting heads, jabbing with their snouts and whipping each other with their tails. Bush pigs are most active at night and spends the day in burrows. Their diet consists of grass, berries, roots, insects, mollusca, little vertebrates and carrion...

The Red river hog is listed as Least Concern (LR/lc), lowest risk. Does not qualify for a more at risk category. Widespread and abundant taxa are included in this category, on the IUCN Red List of Threatened Species

Namings for the red river hog

The females are called 'sow' and males 'boar'. A red river hog group is called a 'drift or herd'.

Some facts about the
Red river hog