Caribou or reindeer pictures and facts 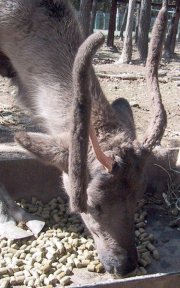 The different species of caribou display a wide range of size. Sexual dimorphism exists, in some subspecies the male is twice as large as the female. The female can become as old as 15 years of age, while the male's average lifespan is up to 10 years in the wild. The caribou in North America can run at speeds of up to 80 km/h (50 mph) and may travel as much as 5,000 km (3,000 miles) in a year. Both sexes grow antlers and these grow again each year (see picture, the velvet is shedding, and you can see the new antler). Their diet consists of leaves of birches and willows, cotton grass, sedges, lichens, but also mushrooms and various other vegetation found on the ground. They use their keen sense of smell to find food covered underneath the snow.

The caribou young are very vulnerable to attacks by bears, wolves, and other predators during their first week of life.

Interesting fact: The caribou (rangifer tarandus) is the only species of deer in which both sexes have antlers. It is argued that Santa's reindeer must be female, because male reindeer will lose their antlers during winter.

Picture of the caribou loosing velvet on one of its antlers by Chris73, licensed under Creative Commons Attribution ShareAlike 2.5

The Caribou, reindeer is listed as Least Concern (LR/lc), lowest risk. Does not qualify for a more at risk category. Widespread and abundant taxa are included in this category, on the IUCN Red List of Threatened Species

Namings for the caribou or reindeer

Some facts about the
Caribou and reindeer