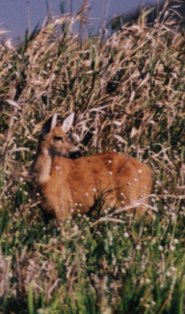 The Pampas deer (Ozotoceros bezoarticus) is known as the world's most polymorphic mammal. Their hide consists of tan fur that is lighter on the insides of their legs and their undersides. They have white patches under their throats and on their lips, and their coats do not change with the seasons.They have bushy, short tails and much like a white-tailed deer their tail is lifted when they run, thus revealing a white patch.

There are three subspecies of Pampas deer.
1. O.b. bezoarticus - dwell in central and eastern Brazil, south of the Amazon and into Uruguay, and is pale red-brown in color.
2. O.b. leucogaster - live in the southwest region of Brazil to the southeast section of Bolivia, Paraguay, and Northern Argentina and are a tawny-brown color.
3. O.b. celer - live in the southern section of Argentina and are a bay color. This is an endangered species and the most rare Pampas deer.

Females are lighter, normally weighing around 33.5 kg or approximately 74 pounds, while males weigh in at an average of 40 kg or 88 pounds. Pampas deer usually have a body length of 110-140 cm, or 43 to 55 inches, and have a shoulder height of about 70-75 cm, or about 27 to 29 inches. Males have antlers while the females have whorls that look like mini-antlers stubs. The males antlers upper prong is divided, but the front main prong is just one solid piece. Males also have a special gland in their back hooves that secretes a smell that can be detected up to 1.5 km or almost one mile.

The Pampas deer is currently classified as a "near threatened" species, meaning they could have the potential of becoming endangered in the future, but as of now there are enough of them that they do not qualify as a threatened species.

Their diet usually consists of herbs, shrubs, and new green growth. They don't consume as much grass as they do browse, which are twigs, leaves, and shoots, and forbs, which are flowering big-leafed plants that have soft stems. They will usually migrate to the where the source of food is the greatest. While the Pampas deers living in Argentina and Uruguay no longer have to worry about predators, those living in Brazil must still be wary of cougars.

Picture of the pampas deer by Carla Antonini, licensed under GFDL

The Pampas deer is listed as Near Threatened (NT), is close to qualifying for or is likely to qualify for a threatened category in the near future, on the IUCN Red List of Threatened Species

Namings for the Pampas deer

Some facts about the
Pampas deer