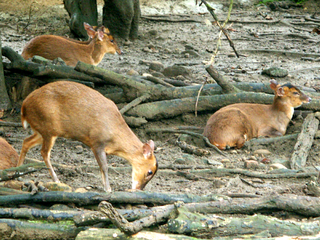 Picture has been licensed under a Creative Commons Attribution ShareAlike license
Author: KaurJmeb

The Reeves's muntjac is listed as Least Concern (LR/lc), lowest risk. Does not qualify for a more at risk category. Widespread and abundant taxa are included in this category, on the IUCN Red List of Threatened Species

Some facts about the
Reeves's muntjac

Facts about the Reeves's muntjac

Habitat Muntiacus reevesi is a forest creature in its native country of China. (Full text)

This chestnut-colored mammal, known to science as Muntiacus reevesi, is named for British naturalist John Reeves, who studied wildlife in China from 1812 to 1831.

In America the number of the Whitetail Odocoileus virginianus has been estimated with traffic kill as a basis and the result used for banning hunting (GÃ¶ransson & Karlsson 1979), and in England the westerly spread of the Muntjac Muntiacus reevesi is largely monitored via road-kills (Slater 1994). (Full text)

Captive observations indicate that the Reeves's muntjac is primarily crepuscular, active at dawn and dusk, although both diurnal and nocturnal activity have been reported. (Full text)