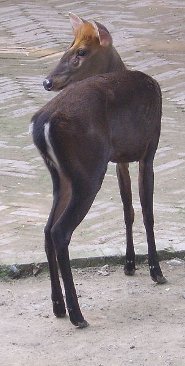 The Black muntjac (Muntiacus crinifrons) is a relatively rare, small member of the deer family that lives in eastern China. It is known by a variety of other names, including the hairy-fronted muntjac, the red-headed blue muntjac, the black aurum muntjac, as well as the head-hooded muntjac. Its body is a dark brown to black and it has light orange markings on the top of its head, on its ears, and on the sides of its nose. The black muntjac's tail is long and is white on its underside. This animal's most distinctive feature, however, is a tuft of long reddish-brown hair that grows between its ears. In the winter, the black muntjac’s coat is darker and thicker that it is in the summer.

Male black muntjacs have front canine teeth that grow out from their mouth in a tusk-like fashion. During territorial disputes, the male black muntjac will often fight an opponent with these tusks. Males also have small antlers, but it is believed that they do not fight with these. The black muntjac can be found in several eastern provinces of China, including western parts of Zhejiang, the northern regions of Fujian, northeastern Jiangxi, and in southeastern Anhui. Some people have reported seeing the black muntjac in China’s Yunnan province and the country of Myanmar, but these sightings may have actually been of a similar animal called the Gongshan muntjac.

Black muntjacs live in hilly, mountainous forests, shrubby areas and jungles with dense undergrowth that occur between 800 to 1000 meters -- about 2624 to 3280 feet -- above sea level. It is a shy animal, always on alert for danger. When frightened, it will seek the shelter of the thick undergrowth.

The black muntjac is a solitary animal. The female can breed at any time of the year and then will give birth to one baby at a time. When born, the fawns have spotted coats that help them blend in with their surroundings. The male black muntjac is very territorial and will fight other males and possibly even other species of deer that have invaded their territory.

Black muntjacs feed on the branches, leaves, fruits and flowers of plants and trees. It is preyed upon mainly by the dhole, a member of the canine family, and possibly the leopard. Humans also hunt and trap the black muntjac for its skin and meat.

Picture of the black muntjac by Shizhao, licensed under GFDL.

The Black muntjac, hairy-fronted muntjac is listed as Vulnerable (VU), considered to be facing a high risk of extinction in the wild, on the IUCN Red List of Threatened Species

Some facts about the
Black muntjac