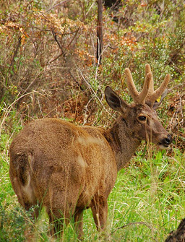 The Chilean guemal (Hippocamelus bisulcus) is a highly endangered species of deer found in the high, frigid mountains of Chile and Argentina. They are also sometimes called the Chilean huemul, South Andean huemul, Patagonia huemul and taruca. With compact bodies and short legs, this species is well-adapted to surviving in the rugged and difficult terrains of the Andes mountains. They have long been a symbol of Chile and are depicted on its national coat-of-arms.

As with most species of deer, the Chilean guemal is distinguished with a short tail and thick coat of hair. Their hide is brown to grayish-brown across the back and sides, tapering to white on the undersides and along the throat. They are known for their very thick, curly hairs which help protect them in weather that is often well below zero. Their average weight and height ranges from 70 kg. (154 lbs.) and 80 cm. (31 in.) for does to 90 kg. (198 lbs.) and 90 cm. (35 in.) for bucks. Only the bucks have antlers, which they shed each year at the end of winter. Bucks also have a distinctive black face mask which is shaped like an elongated heart. All fawns are born without spots.

Although they were once very common in the mountainous regions of lower, southwestern South America, the populations of Chilean guemal are now found only in Chile and very limited parts of Argentina. They prefer to live in herds consisting of both males and females. Most of their time during the summer months is spent in very high and rugged mountain cliffs while in winter they prefer the lower, forested valleys. Their diets consist mainly of plants and shrubs such as lichens, grasses and leaves.

The status of the Chilean guemal is now ranked as extremely endangered. Although the cougar is its only major natural predator, many other factors have caused a rapid decline in the species populations over the past two decades. These factors include hunting by local humans for meat, fire and erosion destruction of native habitats, disease transmitted by livestock and competition for food arising from the growing populations of non-native Red Deer (Cervus elaphus). At this time, the remaining populations are found only in the Aysen Region of Chile and in a very small section of adjacent Argentina where their numbers are estimated to be as low as 350 surviving individuals.

Picture of the Chilean guemal by magical-world, licensed under the Creative Commons Attribution-Share Alike 2.0 Generic license.

The Chilean guemal, chilean huemul, south andean deer, south andean huemul is listed as Endangered (EN), considered to be facing a very high risk of extinction in the wild, on the IUCN Red List of Threatened Species

Some facts about the
Chilean guemal