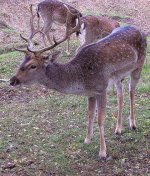 A Fallow Deer (Dama dama) is slender, medium-sized, and its appearance is not exactly ordinary. They are not as stocky as their brethren kind, the legs are quite long, head is thin, and the neck is long, but no...not as long as a giraffe's. A Fallow Deer presents a graceful facade, and it is in fact a parkland creature enjoying popularity. Its coat is quite a sight with its patterns and color. Many Fallow Deers have pale flanks of chestnut brown, while lower areas are white, the same goes for the inside of legs.

Its tail is long, holds a black end, making it stand out against the rump's white. The male, and they are known as bucks, are bigger and heavier than females. The male Fallow Deer has antlers, which are absent from the distaff side. Indeed, to say that a Fallow Deer's antlers are impressive is not an understatement. Not like other kinds of deer, the Fallow Deer's are flat and broad. Fact is, the antler is dependent on the age of the individual, with of course the old ones holding the largest antlers, fascinating datum huh?

Right after the Ice age (last), these deers were discovered in North Africa, and parts of the Balkans, but due to the heavy hunting of mankind, the numbers quickly went down. Until it came to the point that Asia Minor was the only place where they could be found. That was then, nowadays, they could be found at a lot of European states. Outside of Europe, they could also be found in the United States. They live a maximum of 11 to 15 years, but those are the ones in captivity, the ones at the wild do not last that long, and it is of course due to predation and the elements. Did you know the deer's antlers grow afresh every year?

The Fallow deer is listed as Least Concern (LR/lc), lowest risk. Does not qualify for a more at risk category. Widespread and abundant taxa are included in this category, on the IUCN Red List of Threatened Species

Namings for the fallow deer

Some facts about the
Fallow deer