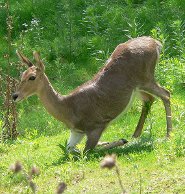 The Mountain Reedbuck (Redunca fulvorufula) is a timid species of Antelope that lives in the rocky slopes and mountainous terrains of northeastern South Africa. These animals are mainly grazers with diets consisting of leaves, grasses and other plants. They also require constant access to fresh water supplies.

Description
Full grown Mountain Reedbucks weigh about 30 kg (66 pounds). Males produce curved horns with rings that average 30-45 cm ( 12-18 inches). They are approximately 80 cm (30 inches) wide at the shoulders. They can easily be recognized by a round bare spot under each ear. These beautiful animals have gray colored coats with bright white underbellies. Their head and shoulders are reddish-brown and they have large eyes and ears.

Habitat
They normally live in herds of five with one mature male and four females. Younger males are pushed out of their herds and form small groups of bachelor herds. When the dry seasons approach the herds sometimes grow to thirty members. These antelopes are diurnal meaning they are mainly active during the day and sleep during the night, although when the extreme heat of the day approaches they become inactive. They can often be seen along the mountainsides grazing in the sun near a water drainage area.

Characteristics
These antelopes are very shy and nervous animals. They communicate vocally with whistling noises. During rest times they stick together in their herds with bucks keeping a watchful eye for predators. If anything alarms them the males will let out a loud shrilling yelp to alert the other herd members and run for safety. The Mountain Reedbuck is known for its accurate weather forecasting. When bad weather is approaching the bucks will turn their backs toward the direction of the heavy rains and wind. They then will seek shelter in covered slope areas until the bad weather passes. The average age of longevity for these creatures is 14 years. During mating season the bucks and females can be seen doing what resembles a dance consisting of high jumping moves. Mating season last throughout the entire year. Females normally have only one fawn at a time with gestation periods of 8 months.

Predators
With increased land development and hunting, the numbers of these animals have significantly declined. Along with man's activities, they are preyed upon by cheetahs, lions and leopards. National Parks in South Africa keep some of these antelopes protected from hunters and land developers.

The Mountain reedbuck is listed as Least Concern. Does not qualify for a more at risk category. Widespread and abundant taxa are included in this category, on the IUCN Red List of Threatened Species

Some facts about the
Mountain reedbuck