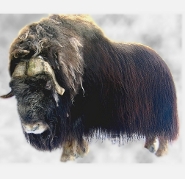 The Ice Age ended about 14,000 years ago, wiping out some majestic large species like the wooly mammoth and the mastodon. But one large mammal survived – the musk ok (Ovibos moschatus) Musk oxen live in the Artic areas of Canada and Greenland. Herds have been successfully introduced to Alaska and Russia. They stand up to five feet tall and can weigh as much as 800 pounds (363.8 kilograms.) Although this is large for an Artic animal today, the musk ox was tiny in comparison to the mammoth and mastodon. Comparatively small bodies need to eat less food.

Another reason for the survival of the musk ox is the strong herd structure in the species. When a predator messed with one musk ox, it quickly found that it had to deal with the entire angry musk ox herd. Predators would focus on the smaller, weaker calves rather than adults. But in order to protect their calves, adults would form a protective ring around the youngsters, leaving their heavily armed heads to face the predators. Unfortunately, this makes the herd sitting ducks for human hunters, but the strategy does work against their non-human predators such as wolves and grizzly bears.

Both males (bulls) and females (cows) grow curving horns. Females stick together in herds up to 36 individuals with many bulls wandering to and from the female herds. Each female herd will have at least one bull with them that participates in helping to protect the cows and calves from predators. Herds come together in the winter for defense but separate during the breeding season.

In late June, family herds of cows separate to form smaller harems for their favored bulls. Each bull services half a dozen cows during the rutting season. Bulls that are too young or too old to breed form their own herds in order to keep protected from predators. Bulls fight for cows through charging and slamming each other’s heads. At the beginning of winter, around November, the bulls let the cows go back to their larger family herds.

Cows have a gestation that can last up to nine months, but often only lasts eight months. Calves are born with eyes open and are able to stand within a few hours. However, if a calf is unable to keep up with the herd, this usually indicates that the calf is ill or injured. The mother then abandons the calf in order to save her own life. With luck, a musk ox can live for 20 years.

Picture of the musk ox by Dixi, licensed under GFDL

The Musk ox, muskox is listed as Least Concern (LR/lc), lowest risk. Does not qualify for a more at risk category. Widespread and abundant taxa are included in this category, on the IUCN Red List of Threatened Species

Namings for the muskox

A young / baby of a muskox is called a 'calf'. The females are called 'cow' and males 'bull'. A muskox group is called a 'yoke, team, drove, herd or nye'.

Some facts about the
Muskox